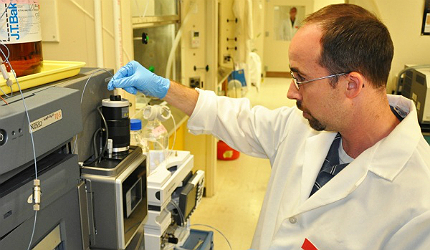 The UK Health Protection Agency issued an anthrax outbreak warning this week – the second in just over two years. Heidi Vella looks at what drugs are currently available or in development to tackle this reoccurring health threat.

This outbreak comes only two years after a previous outbreak in 2009 / 2010 – also caused by contaminated heroin – where 14 drug users died in Scotland, with a total of 119 being infected across the country, proving anthrax is a deadly, albeit rare, but very real threat.

So what drugs are available on the market to tackle this fatal but rare infection, that is more commonly associated with bio-terrorism and war camps than public health? Are healthcare professionals adequately equipped to tackle this infection that, before 2009, hadn’t caused a significant outbreak for nearly 50 years?

Antibiotics, the first line of defense

“Currently there are very few types of drugs available to treat anthrax infection due to its rarity.”

Anthrax is a bacterial infection caused by bacillus anthracis. It is primarily found in animals but spores of the disease can live in the environment for decades. Although not typically a disease that affects humans it can infect them.

The traditional means by which the bacterium gains entry into a new host (a person or an animal) includes access via broken skin and across the lining of the gut wall as a consequence of eating under-cooked meat from an animal that has died of the disease, or by inhaling anthrax spores. Currently there are very few types of drugs available to treat anthrax infection due to its rarity. The main type of drug available is antibiotics.

Most strains of anthrax are sensitive to Penicillin, doxycycline, erythromycin, chloramphenicol, gentamicin and ciprofloxacin, which are the common antibiotics administered through an intravenous drip for anything up to 60 days. In April 2012 the US Food and Drug Administration approved another antibiotic, Levaquin (levofloxacin), to treat patients with the plague, a rare and potentially deadly bacterial infection.

The drug can also be used to treat anthrax infections and was approved based on successful animal trials, but has not been tested on humans as yet.

In the 2009 / 2010 outbreak Dr Tim Brooks from the Health Protection Agency said anthrax immunoglobulin, which is made from antibodies of other people who have been injected with the anthrax vaccine and then injected into patients, was sent from America and used on some patients.

“The threat of bio-terrorism keeps the FDA ploughing money into anthrax drug development, even though they may never be fully licensed.”

However, he states: “There is not sufficient evidence to suggest it was useful and its value is yet to be determined.” The drug is also unlicensed.

Once anthrax has reached a person’s blood stream it is less likely antibiotics will work. Once in the blood anthrax begins to poison the patient, therefore antibiotics are only really successful if caught early.

“If it’s cutaneous [on the skin] anthrax infection then you can seal the wound and prescribe antibiotics and it will probably get better.

“If it’s a different mode of presentation [either intestinal or inhalation] normally by the time you are sick it is a bit late in the day for antibiotics, you have to have other forms of supportive treatment and at the moment there aren’t any that are licensed,” says Professor Les Ballie of Cardiff University, who used to run the US Navy Bio Defense programme from 2003 – 2007 in Maryland, Balitmore.

Anthrax rarity has hindered the development of new drugs

“Anthrax is a bacterial infection caused by bacillus anthracis. It is primarily found in animals.”

The rarity of anthrax infections has hindered development of new drugs to treat it. Apart from a variety of vaccines – which are a pre-exposer type of protection and not a viable treatment option for those already infected – there are no other licensed drugs available specifically for anthrax, although there have been several trials of antibody drugs carried out.

One antibody drug currently in development is Valortim, a ‘fully human monoclonal antibody’ targeted at treating inhalational anthrax infection. Valortim, which the development of is being supported and funded by the government, has an investigational antibody which targets PA, a protein component of the toxins produced by the bacterium.

By targeting PA, Valortim is supposedly able to protect the cells from damage by the anthrax toxins. In non-clinical studies, Valortim protected animals one hour after spore exposure.

Although drugs such as Valortim are in development – mostly for counter bio-terrorism purposes – getting them licensed could be another matter altogether.

“Once in the blood anthrax begins to poison the patient, therefore antibiotics are only really successful if caught early.”

“The problem with something like anthrax is you can’t really carry out full clinical trials because you would usually use the drug in an area of the world where anthrax was common and see what its effect was, where in the case of anthrax these places don’t exist.

“So the regulators like the Food and Drugs Administration (FDA) in the US have big problems in the future trying to license these drugs,” says Professor Ballie.

The FDA do have something they call the ‘Animal Efficacy Rule’, whereby drugs can be licensed if “efficacy findings from adequate and well-controlled animal studies to be used in cases where it is not feasible or ethical to conduct trials in humans.”

Therefore anthrax treatment drugs may be licensed this way, but this may restrict sales to other countries.

One drug that has been tested on 400 human volunteers, but for safety, tolerability and pharmacokinetic parameters only, and not on infected individuals, is Raxibacumab. It’s developed by Human Genome Sciences and targets anthrax toxins after they are released by the bacteria into the blood and tissues in patients with inhalational anthrax infection. It’s one of the most promising new anthrax drug developments.

The only other drugs used to fight anthrax infection are vaccines, which are usually only administered to people who work in an environment where anthrax could be a hazard, such as slaughtermen or fellmongers, and are a pre-exposure drug, so are useless once a person is infected. The current vaccine is made solely by the Health Protection Agency and is given in four separate injections with a monthly booster.

Referring to the recent cases of infection in Blackpool Professor Ballie comments: “These people [drug users] are already disadvantaged because there immune system is not the best.”

Therefore handing out a vaccine wouldn’t necessarily work. It remains that while anthrax outbreaks in the vulnerable appear to be on the rise in the UK and Europe the development of new medicines, though happening, is very challenging, not least because of a lack of infected people to do clinical trials on but because drug companies are unlikely to spend millions of pounds developing a drug for an infection that is still very rare – except in the US, where the threat of bio-terrorism keeps the FDA ploughing money into anthrax drug development, even though they may never be fully licensed. The most important defense against anthrax remains awareness for early treatment and old fashioned antibiotics and surgery.

Protecting the US from bio-threats: a public-private approach

Mid-way through 2012 and it’s easy to feel that the United States (US) Government has stopped taking bio-security seriously. The Obama administration’s reluctance to deal with the issue has received widespread criticism.

Under your skin – redefining drug delivery with implantable microchips

Pill popping and injections are routine but could a wirelessly controlled microchip change drug delivery forever?

Cutting the red tape: the FDA responds with exclusive interview

Drug shortages in the US have been blamed on red tape and bureaucracy suffocating development, but how have the Food and Drug Administration (FDA) responded?

Deadly infection – what to do in the case of anthrax outbreak

The UK’s health agency warned of a potential anthrax outbreak last week, as officials confirmed a second person had died from the lethal infection more commonly associated with biological warfare.