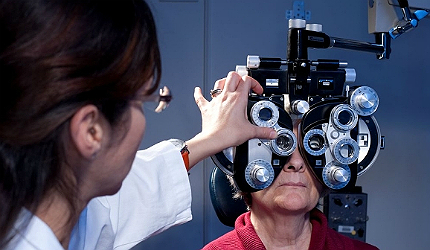 In May 2012, two closely watched studies, carried out for the National Eye Institute (NEI) in the US and the National Health Service (NHS) in the UK, found that two drugs developed and marketed by Roche, Avastin and Lucentis, are equally effective for the use of treating elderly people with a common eye disease known as wet age-related macular degeneration (wet AMD).

While there is very little discrepancy in efficacy, there is a major difference in cost. At present the far more expensive Lucentis is the only approved treatment. Avastin, which costs fifteen times less than Lucentis, was originally developed to treat cancer and is currently not marketed by Roche as a treatment for wet AMD.

The dispute about the two drugs peaked in May after the release of two government-funded studies – the Comparison of Age-related macular degeneration Treatment Trial (CATT) in the US and the treatments to Inhibit VEGF in Age-related choroidal Neovascularisation (IVAN) trial, in the UK. The results confirmed Avastin’s safety and led to an outcry from the health sector, with many doctors and healthcare providers saying they would actively look into prescribing Avastin, despite it not being indicated for the condition.

Roche has however stated that it does not promote Avastin’s use as a treatment for wet AMD and that it has no intention to seek a licence in the area. Additionally, so far there has been no other industry-funded clinical trial to compare the effectiveness and safety of the two drugs directly, raising questions if Big Pharma’s financial interests could put patient safety and wellbeing at risk.

“It doesn’t surprise me that the industry, which has a vested interest with millions of dollars at stake, is trying to criticise a head-to-head trial.”

Since 2006, doctors have been using Avastin off-label to treat wet AMD, a common cause of loss of vision in elderly people which claims at least 23,000 newly-diagnosed patients each year. When packaged in doses small enough for eye injections, the cancer drug, developed and marketed by Roche, costs only about $50 a dose, or £60 in the UK. Lucentis, on the other hand, which Roche developed specifically for intraocular use, costs about $1,950 per dose. In the UK, where Novartis markets Lucentis, the price for one injection is £740.

Lucentis is the US Food and Drug Administration (FDA)-approved choice and was the single biggest expense in Medicare’s Part B programme covering injectable drugs, according to a recent report by The Wall Street Journal. But Avastin is being widely used off licence, with the UK following suit. In 2011, four UK NHS Trusts in the south of England allowed for the drug to be prescribed for wet AMD, even though the country’s drugs watchdog, the National Institute for Health and Clinical Excellence (NICE), recommends Lucentis.

The financial stakes for both Roche and Novartis are high: Roche’s US division, Genetech, tried to restrict the use and circulation of Avastin to prevent its ophthalmic use, but the ruling was softened after eye doctors revolted against the decision. In April 2012, Novartis asked for a judicial review of off-label Avastin for use in the UK, after the NHS Trusts of Southampton, Hampshire, the Isle of Wight and Portsmouth declared to pay for the use of Avastin, when prescribed by an ophthalmologist.

“Novartis has been compelled to take action primarily to ensure that patients and clinicians continue to have access to Lucentis which is the only licensed and NICE approved treatment for wet AMD,” says a Novartis spokesman, adding that it would undermine the need of a marketing authorisation if medicines are intended for widespread use.

Under EU law, Novartis should also have been consulted by the individual NHS Trusts before deciding to prescribe Avastin for the treatment of wet AMD. And, in addition to all this, both the CATT and IVAN trial now add even more fuel to the flames.

Both studies came to the conclusion that the two drugs improve vision in the same way when administered on a monthly or as-needed basis. The NHS-funded IVAN trial involved 610 patients in 23 hospitals, making it one of the largest research projects studying eye disease in the UK. Initial results showed that both Lucentis and Avastin were effective in stopping the deterioration of sight, measured by asking patients to read a standard eye chart.

“The NHS-funded IVAN trial involved 610 patients in 23 hospitals and is one of the largest research projects studying eye disease in the UK.”

Patients received injections of the drugs into the affected eye every month for the first three months. Then, they were subdivided in groups, to receive either one injection at every visit after or only if the doctor decided there was still active disease. Compared to CATT, the IVAN trial had a somewhat higher rate of arteriothromboembolic events, such as heart attacks, strokes or heart failure among people treated with Lucentis. However, when the results of the two studies were combined the slight difference was cancelled out.

Both the IVAN trial and CATT have shown no difference in mortality between the groups receiving the different drugs, but both found a slightly higher rate of other serious adverse events in those who received Avastin. However, Bristol University’s IVAN trial co-investigator Barney Reeves claims that the results may not be attributed to Avastin directly, but could be traced back to a number of reasons, which could not be pinned down to one particular drug.

“There is no evidence that the increased risk of a serious adverse event has any impact in terms of mortality for example, or quality of life; and the resource use associated with treating the complications is not appreciably offsetting the saving in costs from Avastin,” he says.

In the run-up to the actual IVAN trial, as well as during the recruitment period, the clinical trial was heavily criticised by industry representatives, who claimed that it was too small and poorly designed. Neither CATT nor IVAN could “reflect everyday practice in the medical retina community and as a consequence the true risk of serious ocular adverse events is misinterpreted,” according to a Novartis spokesman.

Barney Reeves counters: “We had criticisms of this kind at the beginning of the trial when Novartis was trying to influence ophthalmologists not to take part. It doesn’t surprise me that [the] industry, which has a vested interest with millions of dollars at stake, is trying to criticise a head-to-head trial that they really do not want to happen.”

According to Reeves, studies are differently designed depending on their purpose: “There are differences between studies that are designed to answer questions that drug companies need answering, in order to obtain marketing authorisation for a new product compared to trials that health policy makers want to be done in order to answer policy questions.”

“The world is in an economic depression and we’re trying to make healthcare funds go further, certainly in the UK.”

Reeves, however, acknowledges that there are certain risks combined with the ocular use of Avastin. The commercially manufactured product has to be compounded into several smaller doses for the injection into the eye, risking contamination and infection or inflammation, which could lead to permanent blindness.

For both, Roche and Novartis these safety concerns are sufficient enough to fight the use of Avastin for wet AMD – even if financial aspects most certainly play a role too. Roche said in a statement in May 2011 that it has no plans to seek a licence for Avastin in wet AMD and does not promote its use in the area – and is not likely to change its mind.

Novartis on the other hand has been looking into large databases and previous studies to find out more about the risks of Avastin for intraocular use, namely the Curtis et al. retrospective analysis, which provides the largest available dataset to date comparing Lucentis and Avastin, as well as the Gower et al. Medicare analysis, which used US Medicare data to compare the systematic and ocular safety of Avastin and Lucentis.

While CATT published its final results after two years of clinical trials in May 2012, the IVAN study is continuing to follow participants into the next year, when the researchers will present a more detailed analysis. Barney Reeves, however, admits that if there was no difference in cost no one would even suggest conducting a clinical trial for the intraocular use of Avastin.

“But as it stands, people faced with making the decisions are trying to balance a difference in drug cost in the UK of about £50 versus £740, excluding VAT. So it’s almost a fifteen-fold difference in cost versus a suspected increase in the risk of serious adverse events, but we don’t have a mechanism at all and which doesn’t seem to be fatal in any way.”

“The regulatory world is extremely risk-averse and arguably that’s their job. But the world is also in an economic depression and we’re trying to make healthcare funds go further, certainly in the UK,” he continues. “It’s the easiest thing in the world to say that everybody has to use Lucentis and this means that treated patients are very slightly safer.”

“The question is whether such decisions should be taken without any consideration of their consequences for aspects of healthcare other than the immediate [needs] of patients being treated with the drug concerned,” he says.