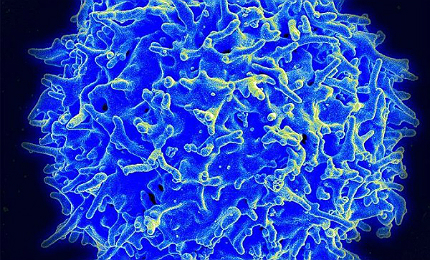 Crucial information regarding a T lymphocyte’s role in fighting against invading infections such as HIV and cancer has, until recently, been locked behind a stubborn membrane.

But, Gregory Tew, professor of Polymer Science and Engineering, and his research team at the University of Massachusetts, have discovered a master key which enables access to naïve T cells without damaging them.

A synthetic protein transduction domain, the team discovered, can mimic natural ones and slip through the membrane without permission.

Now Tew hopes to understand in more detail cell signalling pathways to enable the development of new therapeutic applications in the clinic.

Sarah Blackman: How did you come across your method of manipulating T-cells?

“A synthetic protein transduction domain, the team discovered, can mimic natural ones and slip through the membrane.”

Gregory Tew: We started by looking at natural protein transduction domains (PTD) and wondered whether or not we could build synthetic mimics of them.

That’s a process we’ve used in the past – about ten years ago we wondered if we could build synthetic mimics of anti-microbial peptides – and the idea is if you can use the whole toolbox of organic chemistry to build structures, then maybe you can get rid of some of the liabilities of peptides.

It also looks like you can make mimics that are more active than the natural peptides. We’ve been working on the research for about two years.

SB: What makes naïve T cells so hard to penetrate?

GT: That’s a question that nobody seems to understand. It’s not clear why T cells are so difficult to penetrate and I don’t know if anybody knows the answer to that.

SB: What other methods have been used to manipulate T cells in the past and why haven’t they worked?

GT: The typical ways that T cells are manipulated would be through electroporation and one of the problems with electroporation is the harsh (electrical field) conditions [the cell is penetrated in] and you actually end up killing about 80% of your cells.

The other major way that T cells are manipulated is using viral methods and these have two concerns: one is that it’s not clear how viral methods are going to translate to human therapy, while the other issue is that you have to activate the T cell for the virus to be able to infect them and manipulate the genome and so you have to study activated T cells, not naïve T cells.

SB: What have you learnt about naïve T cells from accessing them for the first time?

GT: Well, we are just beginning to do those studies. What the paper showed is that we can manipulate them and that we have the ability to control NOTCH1 signalling. So, now, what we can begin to do is understand the role of certain proteins in the process of T cell activation because now we can begin to modify the naïve T cells and then activate it.

GT: Our methods are convenient in that we simply mix our protein transduction domain mimic (PTDM) with the sRNA and they form a non-covalent complex and then we add it to the same solution media as the T cells. So it’s pretty simple. It’s this non-covalent interaction between the PTDM and the cargo, which in this case is the interfering sRNA, that allows this approach to be versatile. The mechanism of cellular uptake is still under investigation but appears to be direct translocation across the membrane.

SB: What happens when the sRNA is delivered?

GT: We believe that as of today, based on some evidence, the process by which the cargo goes in is called passive diffusion, so it’s direct translocation across the membrane.

“It also looks like you can make mimics that are more active than the natural peptides.”

What’s going on is that we’re a knocking down the protein NOTCH1 and it’s pretty clear that this protein controls T cell signalling pathways, so in many ways these T cells are not functioning the way a normal T cell would and that could be good or bad.

One of the things we are seeing is that because we can control NOTCH1, we can now control how the T cell signals.

For example, if I show a T cell to a foreign body (APC) the T cell does not recognise that it’s foreign and that could be helpful in areas such as transplant surgery, autoimmune disease and so on.

SB: How will your findings contribute to new therapeutic applications being developed to treat HIV and cancer?

GT: It turns out that HIV infects CD4 T cells and so now that we can manipulate T cells in new ways, we hope to be able to understand that pathway in new details and be able to develop defences against that. We hope to make significant progress in this area during the next five or ten years.

SB: Do you think that T cells hold the secrets to eradicating HIV and cancer?

“One of the things we are seeing is that because we can control NOTCH1, we can now control how the T cell signals.”

GT: I don’t know if I would say it quite that strongly. Certainly, T cells have a major role to play in the lifecycle of HIV and cancer.

What we hope to do with cancer is to increase the population of reactive T cells. One thing that is going on right now is that doctors will harvest your T cells and then they will find the reactive T cells, grow them and re-inject them.

Reactive T cells remain active against cancer cells so what we think we can do now, because we can manipulate T cells in a new way, is increase the population of reactive T cells.

Will Obama live up to his promises on AIDS?

President Obama has been carried back into the Oval Office on another wave of optimism, but is there reason to doubt his promise to tackle the global AIDS epidemic?

Under your skin – redefining drug delivery with implantable microchips

Pill popping and injections are routine but could a wirelessly controlled microchip change drug delivery forever?