At the AD/PD 2022 International Conference on Alzheimer’s Disease (AD) and Parkinson’s Disease (PD), Biogen presented new data from its Aduhelm (aducanumab) clinical programme, which has focused on the benefits of treatment. Aduhelm, a recombinant human monoclonal antibody (mAb) that binds primarily to aggregated forms of amyloid beta (Aβ), was approved in June last year by the US Food and Drug Administration (FDA) for the treatment of patients with mild cognitive impairment or mild dementia stages of AD.

The approval was based on data from two Phase III trials, ENGAGE (NCT02477800) and EMERGE (NCT02484547). The results of these trials, however, were considered by many in the field—including the agency’s own advisory board—to be far from substantial. As such, the FDA’s approval and Aduhelm’s launch have been steeped in controversy.

In hopes of boosting physician and public confidence in the drug, Biogen used AD/PD 2022 to announce new long-term data for Aduhelm. Data from long-term extensions of the ENGAGE and EMERGE trials showed that in patients treated for up to two and a half years, Aduhelm continued to reduce Aβ plaques, as measured by change from baseline in amyloid positron emission tomography (PET) composite standardised uptake value ratio (SUVR), as well as tau tangles, as measured by plasma p-tau181, both of which are key pathologies seen in AD. The company also demonstrated that patients with greater Aβ clearance at 78 weeks (defined as an SUVR lower than 1.1) went on to show a greater decrease in p-tau181 at week 128 when compared with patients having lower levels of Aβ clearance.

In addition to the long-term extension data, further data from the original ENGAGE and EMERGE trials was announced. Most notably, it was presented that in both Phase III trials, patients with a reduction in plasma p-tau181 at 78 weeks also demonstrated reduced clinical decline across four measures: Clinical Dementia Rating Scale Sum of Boxes (CDR-SB) score, the Mini-Mental State Exam, the Alzheimer’s Disease Assessment Scale-Cognitive Subscale 13-item test, and the Alzheimer’s disease Cooperative Study scale for activities of daily living in mild cognitive impairment. 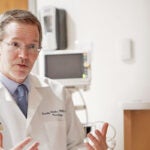 The trials also showed a correlation between reduction in Aβ and CDR-SB, showing that a reduction in brain Aβ plaque levels is associated with slowing of clinical decline. This data is particularly important for Biogen as the FDA’s approval of Aduhelm was based on its ability to reduce Aβ, a biomarker of AD, rather than on clinical improvement. Demonstrating that reduction in Aβ and p-tau181, both biomarkers of AD, is correlated with reduced clinical decline should boost confidence in Aduhelm as a disease-modifying therapy for AD that results in a meaningful clinical effect.

Biogen also presented further safety data focused on concerns around amyloid-lowering therapies and the development of amyloid-related imaging abnormalities (ARIAs). Results from the ENGAGE and EMERGE studies showed that the majority of patients with ARIA related to underlying vasogenic oedema (ARIA-E) detected in the brain are asymptomatic (74%), and when patients did experience symptoms, they were mostly mild (68%) or moderate (28%) in severity. In addition, ARIA-E was most commonly mild or moderate in its radiographic severity. Continued monitoring of Aduhelm’s association with ARIA development will not only be important in determining how successful Aduhelm can be, but will also impact the success of the anti-Aβ class of drugs as a whole.