With the American Association for the Study of Liver Diseases (AASLD) Liver Meeting kicking off today, we talked to University of California in San Diego director of hepatology Dr Rohit Loomba on the seemingly endless chase to get a drug approved for nonalcoholic steatohepatitis (NASH). NASH is triggered by the build-up of fat in the liver, which leads to liver inflammation and then fibrosis.

In a wide-ranging conversation, Loomba points to the potential for noninvasive imaging to replace liver biopsies in clinical trials, and discusses how drug developers can address side effect issues to garner regulatory support. He raises the discrepancy between US and European regulatory agencies’ efficacy success bars.

Can biopsies be replaced by imaging?

The use of liver biopsies to measure treatment effect is one of the main challenges in developing therapies for NASH, Loomba says. “If we move from liver biopsy-based assessment to a noninvasive assessment, things will become much easier,” he adds. 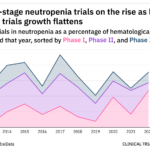 Liver biopsies are invasive procedures whereby a small piece of liver tissue is retrieved from the trial participant at baseline and throughout specific points of the trial. This is to confirm a patient’s NASH status as well as treatment improvements. Investigators have flagged biopsies as potentially flawed owing to the sample potentially not being representative of the liver, or the varied interpretation of the sample among pathologists. It is still the gold standard, however, owing to noninvasive procedures having limited data to underscore their value.

But there have been major strides in imaging that could change the biopsy paradigm, Loomba notes.

There have been major strides in imaging that could change the biopsy paradigm.

Loomba points to a study published in the journal Gut that investigated the value of noninvasive Magnetic Resonance Imaging Proton Density Fat Fraction (MRI-PDFF) as a potential alternative to biopsies. Data shows that a 30% or higher reduction in MRI-PDFF in early-phase trials can provide a valuable estimate of the odds of at least a one-stage improvement in fibrosis. There are five fibrosis stages, from F0 (no fibrosis) to F4 (cirrhosis or advanced scarring).

Loomba highlights another paper in Gut about a study of noninvasive imaging Magnetic Resonance Elastography (MRE) in combination with the Fibrosis-4 (FIB-4) index to identify NASH clinical trial candidates. FIB-4 is a scoring system based on laboratory tests. The study found that the combination led to a positive predictive value of 97.1% in identifying patients with at least F2 fibrosis who would be ideal for treatment.

“We’ve made some dent in terms of imaging assessment,” Loomba adds. While these noninvasive tests may not completely match histology data and replace it immediately, there is increasing evidence these are reproducible efficacy endpoints, he says. Also, more likely than not, they will be able to depict the efficacy of treatment under investigation, he notes.

The next challenge is to further solidify the value of these noninvasive measures by collecting longer-term outcomes to validate their clinical value. Work is underway to do so, Loomba says.

Investigated drugs’ less-than-ideal safety profiles represent another issue that has plagued NASH drug development. Therapies have faced regulatory pushback and investigator scepticism owing to safety profiles showing pruritus (itch) or increases in LDL-cholesterol. A clean safety profile is especially needed in NASH as there are patients who are asymptomatic. In fact, asymptomatic NASH patients have made it hard to make estimates on NASH prevalence.

“What the FDA wants is a safe drug that is efficacious. It does not want an efficacious drug that may be unsafe,” Loomba explains.

NASH drug manufacturers should acknowledge the adverse events head on.

NASH drug manufacturers should acknowledge the adverse events head on, Loomba says. For starters, there needs to be a complete understanding around the cause of the side effect. Second, if these side effects cannot be overcome by tweaking the mechanism of the drug, safety protocols should be developed to alleviate these issues.

While these protocols may restrict the use of the drug in certain subpopulations, it will make it easier to get the drug on to the market, Loomba explains. “You may end up with a smaller pie but that’s fine; at least you get the drug approved,” he adds, noting that there are no therapies approved for NASH. Once a drug is approved, this would be the time to potentially expand the target audience of the drug with additional studies in different subpopulations.

Loomba says EMA’s efficacy bar is notably higher than the FDA’s. As an example, the EMA is interested in a drug that can provide a two-stage improvement in the fibrosis scale. But based on experience, this bar is too high, particularly if that NASH trial only runs for 72 weeks, Loomba adds. With the FDA, improvement in fibrosis greater than or equal to one stage is an acceptable component of an efficacy barometer.

To succeed in the EMA’s two-stage improvement bar, a bigger sample size would be needed, Loomba says. But a larger sample size would mean the placebo response rate also increases, he adds. Loomba is working with a panel of NASH investigators on a manuscript that points out further mismatch between the two agencies. The paper would call for efficacy benchmark harmonisation.