Over the course of 2017, there has been an explosion of news regarding biosimilars for oncology products. This year marked the first US and European approvals for biosimilars in oncology, with the February 2017 approval of Celltrion’s rituximab biosimilar by the EMA (which is marketed under four names – Blitzima, Ritemvia, Rituzena, and Truxima – and officially launched in April) and the September 2017 FDA approval of Amgen’s Mvasi, a bevacizumab biosimilar.

Figure 1: total number of clinical trials, by product and phase 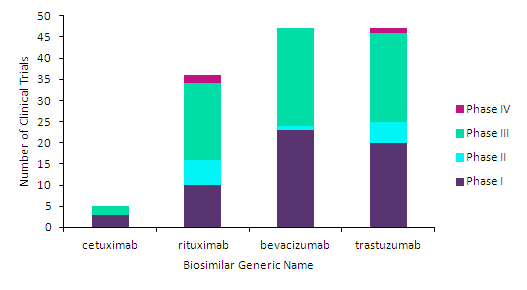 GlobalData predicts that biosimilar news will continue to escalate in the coming years. An analysis of clinical trials for all planned, ongoing, and completed trials revealed a total of 135 trials of biosimilars for four oncology products. Roche’s three products are under threat with a total of 36, 47, and 47 trials for rituximab, bevacizumab, and trastuzumab biosimilars, respectively, by various other developers. There is far less commercial interest in developing a biosimilar for Eli Lilly’s Erbitux (cetuximab), a product with 2016 sales of $1.6bn. When this figure is compared with 2016 sales of $7.6bn, $7.1bn and $7.1bn for Rituxan, Avastin and Herceptin, respectively, it is obvious why biosimilar developers are keen to cash in with a copy of these blockbuster drugs.

Among the analyzed trials, there were 57 ongoing and completed Phase III clinical trials. By drug, this represents two trials for cetuximab, 18 each for rituximab and trastuzumab, and 19 for bevacizumab. Close to half of these trials (43.9%, 25 out of 57) were completed trials. Of particular interest, rituximab and trastuzumab seem to have a higher proportion of completed trials than bevacizumab. This large number of completed Phase III trials could signal an increased number of filings for oncology biosimilars in the near future.

Increase of resumed trials slowing due to Covid-19 cases rising

19 Nov 2020
Registration is disabled.
We use cookies to ensure that we give you the best experience on our website. If you continue to use this site we will assume that you are happy with it.ContinueLearn more