Multiple sclerosis (MS ) is an autoimmune disease that principally affects the central nervous system by causing nerve sheath damage and paralysis. MS symptoms include muscle weakness, weak reflexes, tremors, muscle spasms, prolonged double vision, slurred speech, and balance problems. It can occur at any age, but commonly affects people ages 15–60 years. The diagnosis of MS depends upon patients’ symptoms, magnetic resonance imaging (MRI) and laboratory results, but it is mostly diagnosed in the late phases of the disease. The risk of MS is higher in women; they are twice as likely to have MS as men.

Figure 1 presents the sex-specific diagnosed prevalent cases of MS in all ages in the 7MM in 2016. 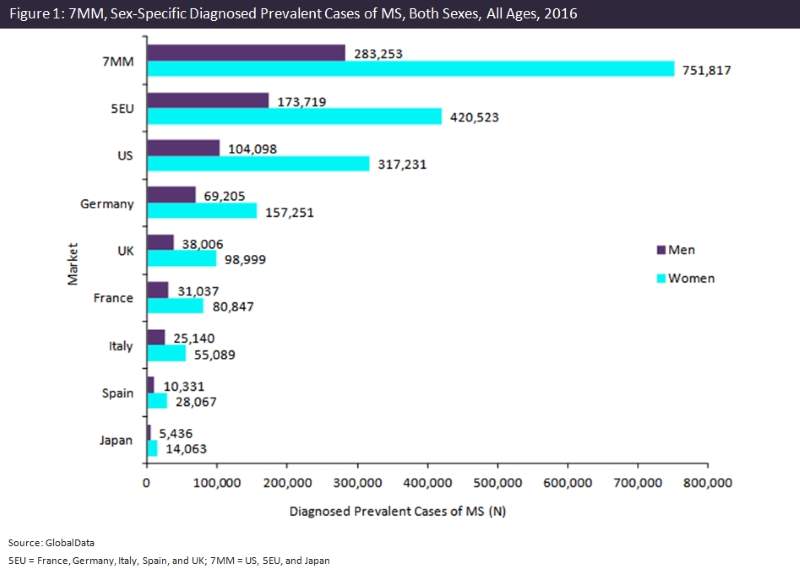 The high women-to-men ratio in the prevalence of MS indicates the existence of an environmental or genetic factor influencing the disease, even though there is currently no strong evidence to support this assumption. This observation should prompt epidemiological studies that focus on the environment and genetics to better understand the factors leading to the difference in prevalence between women and men. As women are more at risk of developing MS, treatment priorities should be aligned to address this imbalance. Currently, there is no cure for MS. However, treatments can help speed recovery from attacks, modify the course of the disease and manage symptoms.