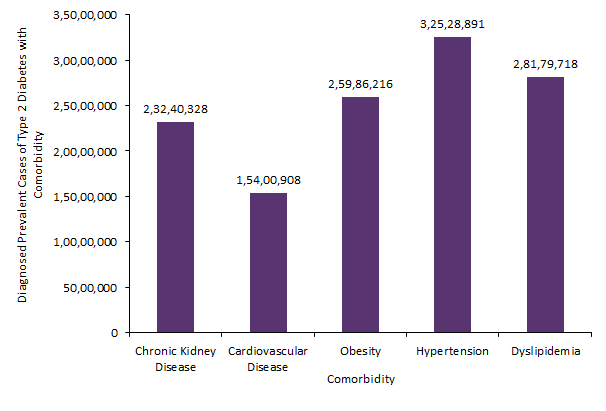 Type 2 diabetes (T2D) is a chronic disorder of glucose equilibrium that results from the body’s inability to make use of available insulin along with relative insulin deficiency. Among adults only, T2D is expected to make up at least 95% of all diabetes cases.

It is one of the most common non-communicable diseases and is an escalating public health problem globally, with an estimated 415 million people afflicted. Additionally, poorly managed diabetes leads to serious complications such as heart attack, stroke, kidney failure, leg amputation, vision loss, nerve damage, and other serious complications. Figure 1 presents the most common comorbidities in persons with T2D.

GlobalData Epidemiologists forecast that there were 56,060,328 diagnosed prevalent cases of T2D in the seven major markets (7MM: US, France, Germany, Italy, Spain, UK, and Japan). Additionally, the majority of T2D cases were also burdened with a significant comorbidity.

Hypertension was the most common comorbidity with more than 58% of people with T2D also having hypertension. Dyslipidemia was the next most common with just over 50% of persons with T2D having this comorbidity, while CKD and obesity were found in 41% and 46% of cases, respectively.

Diabetes on its own is a significant disease that can be very difficult to manage correctly. With additional illness, the disease becomes even more complex and increases the risk of serious illness and death.