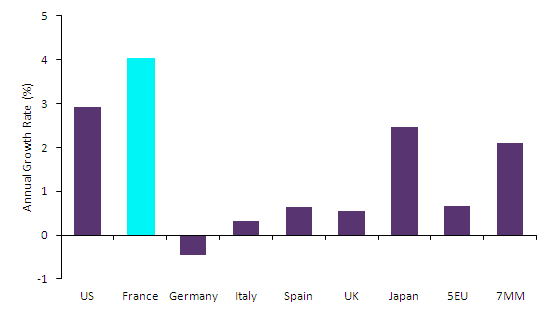 All countries in the seven major markets (7MM: US, France, Germany, Italy, Spain, UK, and Japan), with the exception of Germany, will see an increase in the diagnosed prevalence cases of Crohn’s disease (CD). France is projected to have the highest Annual Growth Rate (AGR) of diagnosed prevalent cases of CD at 4.04%, almost double the overall AGR of the 7MM at 2.09%. Germany, in contrast with the other markets, will see a decrease in patient size for CD. Figure 1 below shows the AGR of diagnosed prevalent cases of CD for the 7MM, with France having the highest AGR by 2026.

CD is an inflammatory bowel disease (IBD), characterized by chronic inflammation of the gastrointestinal tract (GI). The inflammation is usually found at the end of the small intestine and at the start of the large intestine. Common symptoms include rectal bleeding, diarrhea, fatigue, weight loss, and stomach cramps. However, individuals experience different symptoms of CD, including the length and severity of the course of the disease.

Inflammation of the GI tract can lead to severe scarring and narrowing of the bowels. There is no cure for CD and treatment options, which include surgery, vary with the severity of the disease. Some research has found that 70–80% of patients will require surgical treatment within 10 years of the disease onset. Research has also found that CD patients have a lower quality of life, compared to healthy individuals and patients with other GI inflammatory diseases.

It is unclear why France is expected to see the highest rise in prevalent cases of diagnosed CD. In France, the prevalence in both men and women is expected to increase, as is the underlying population. Historically, the changes in the frequency of CD have been thought to be a result of environmental factors.