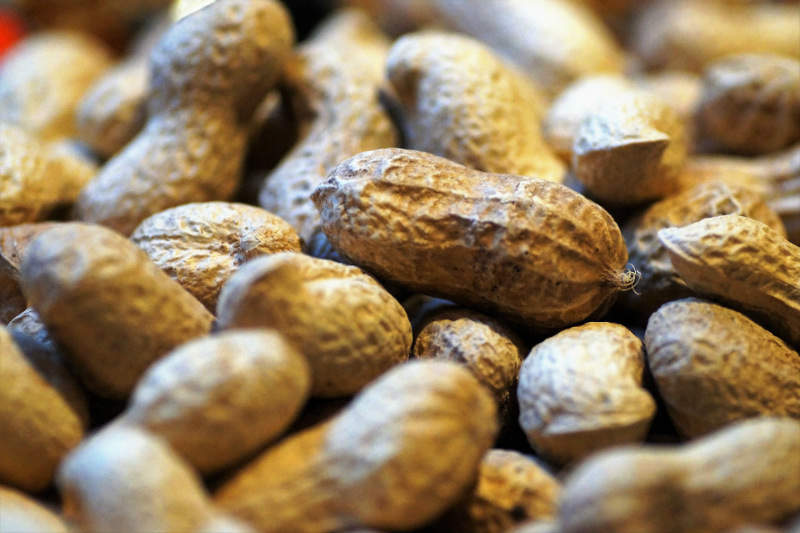 Based on the companies’ projections, GlobalData believes that DBV’s epicutaneous immunotherapy patch, Viaskin Peanut, and Aimmune’s oral immunotherapy drug, AR-101, will both be brought to market in 2019–2020. But, with overwhelmingly balanced sets of advantages and disadvantages, both companies stand a fair chance of dominating the peanut allergy marketplace—or simply sharing it. Some of our considerations from the JPM 2018 Healthcare Conference and interviews with key opinion leaders (KOLs) are discussed below.

Aimmune’s approach to treating peanut allergy takes advantage of the well-established phenomenon of oral tolerance: the foods we eat tend to be tolerated by our immune systems. Its drug, AR-101, is composed of purified peanut protein and is administered orally to patients via a patented protocol known as CODIT (Characterized Oral Desensitization ImmunoTherapy). The high level of quality control used in its peanut protein production and the usage of a standardized oral administration protocol sets Aimmune’s therapy apart from other “home-brew” oral immunotherapy options.

Because of the uniqueness of its approach, GlobalData predicts that as the marketplace for peanut allergy immunotherapy expands, Viaskin Peanut will likely face less competition than AR-101. However, though other oral immunotherapy options may be approved in the next decade, AR-101 will remain quite the force to contend with. Not only will they likely hold the first FDA-approved oral immunotherapy for peanut allergy, Aimmune has built up an impressive manufacturing capacity and has secured an extended (10-year) exclusive supply agreement with Golden Peanut and Tree Nuts Company for the starting material used to make AR-101.

The balance of efficacy and safety is one of the most fascinating considerations when comparing AR-101 and Viaskin Peanut. KOLs interviewed by GlobalData agree—AR-101 induces a more rapid and dramatic increase in tolerance, but Viaskin Peanut has a superior safety profile.

Among patients treated with AR-101 for six months, an additional 60% met tolerance endpoints in comparison to placebo. In comparison, patients treated with Viaskin Peanut for 12 months responded only 21% more than those treated with placebo (similar efficacy rates were seen in Phase II and III trials). However, a study looking at long-term treatment with Viaskin Peanut suggests that this response rate can increase over time—nearly 15% more over three years.

Though Viaskin Peanut requires long-term usage to achieve only modest efficacy, it has been deemed by KOLs as an overwhelmingly safe option for treating peanut allergy. Its unique epicutaneous delivery method and minute peanut protein dose (250mcg) minimize the risk of treatment emergent adverse events. The most common side effects include local itching and mild rash (typically managed with antihistamines and topical corticosteroids).

In contrast, immunotherapy with AR-101 involves the oral administration of allergenic doses of peanut protein (the maintenance dose is 300mg). Thus, this therapy runs the risk of severe adverse effects including gastro-intestinal (GI) reactions and, in rare cases, anaphylaxis. GI issues in particular led to a high drop-out rate of about 20% in the Phase II study.

Considering DBV’s projection to submit their Biologics License Application (BLA) in H2 2018, Viaskin Peanut will most likely be the first approved peanut allergy immunotherapy to enter the market. Though this may give DBV a small head start before approval of AR-101, it is unlikely that this alone will secure Viaskin Peanut the greater market share.

The established and growing trend of using oral immunotherapy to treat peanut allergy experimentally will likely cement AR-101’s place in the market, whenever it is approved.

Acceptance by physicians and patients

AR-101 and Viaskin Peanut hold a lot of promise for the treatment of peanut allergy—but will physicians and patients use them?

Both products have been designed for easy integration by allergists into their practices. However, it is likely that in comparison to Viaskin Peanut, AR-101 will require a greater number of visits to the allergist. Aimmune’s CODIT protocol consists of an initial escalation phase (0.5mg to 6mg of peanut protein in a single day), followed by biweekly up-dosing until a final maintenance dose of 300mg/day is reached (about six months).

The office visit for the initial escalation phase can take over three hours, and each up-dosing visit requires medical evaluation for about 90 minutes. However, integrating the CODIT protocol into their practice might not be an issue for the large number of physicians that already offer oral immunotherapy for peanut. In fact, it may streamline their processes considerably.

In comparison, Viaskin Peanut involves the continuous daily administration of the same low dose of peanut protein. With an exceedingly low risk of adverse reactions, patients receiving this drug would theoretically require fewer face-to-face check-ins with their physicians.

KOLs interviewed by GlobalData posit that Viaskin Peanut, being a gentler therapy, is best suited for small children, patients with high anxiety, and possibly patients with severe asthma, who are at greater risk of a negative reaction to peanut. In addition, patients may also prefer Viaskin Peanut because it adds less complexity to their lives and puts fewer limitations on their activity. For example, in order to avoid potential adverse reactions, patients receiving oral immunotherapy need to avoid certain activities after dosing like strenuous exercise and hot showers.

For slightly older patients (ages six years and older) seeking rapid results, KOLs affirm that AR-101 oral immunotherapy is the best option. In the context of long-term management of tolerance, neither AR-101 nor Viaskin Peanut can ensure sustained unresponsiveness to peanut without continued usage of the products.  However, some KOLs think that an oral maintenance protocol with AR-101 might be easier for patients to comply with in the long term. One KOL even suggested that patients may start their journey to tolerance with epicutaneous therapy and switch to oral immunotherapy for long-term management.

Based on projections made at the JPM 2018 Healthcare Conference, it appears that both Aimmune’s AR-101 and DBV’s Viaskin Peanut will have prominent places in the growing peanut allergy market. DBV’s epicutaneous approach to immunotherapy is unique, and patents on its Viaskin patch technology will likely shield the product from competition for some time.

Though DBV will likely be the first to market, GlobalData does not believe this specifically will give it much of an advantage over Aimmune’s AR-101 in the long term. AR-101 brings key innovations to the well-established oral immunotherapy space by improving the quality and characterization of their peanut allergen and administration protocol.

It seems that the success of these two products boils down to what patients with peanut allergies end up valuing more: efficacy or safety. AR-101 consistently works better, while Viaskin Peanut has minimal risks of severe side effects. GlobalData believes that top-line data from Aimmune’s Phase III trial (PALISADE) (expected to be released in February) will help define the efficacy/safety balance of AR-101 and likely clarify its place alongside Viaskin Peanut in this new and exciting market. 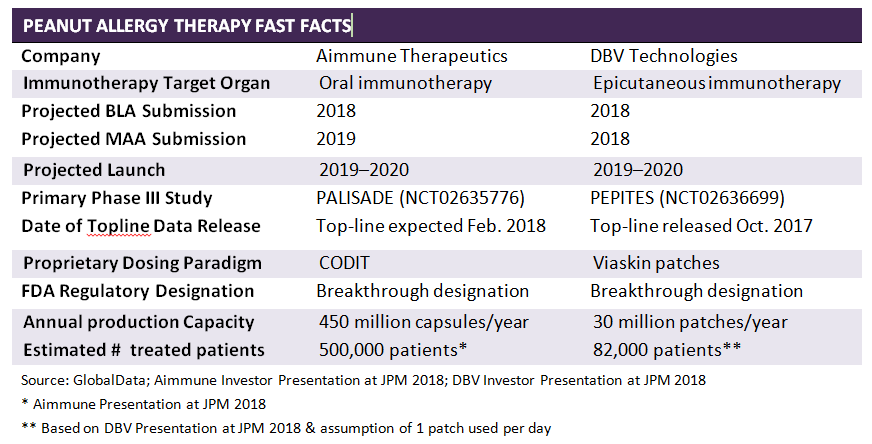