The prevalence of vaccine-type human papillomavirus (HPV) infections in American women decreased significantly between 2009 and 2014, according to a study published this month in Obstetrics & Gynecology. The prevalence of vaginal HPV infections in women ages 18 to 59 years fell from 7.9% in 2009–2010 to 5.5% in 2013–2014. This decrease was most pronounced in women ages 18 to 26 years. Notably, prevalence in unvaccinated women ages 18 to 26 years fell from 19.5% to 9.7% during this timeframe, suggesting younger unvaccinated women are benefiting from herd immunity from the HPV vaccine. Figure 1 shows the changes in prevalence over time in segments of the study population. 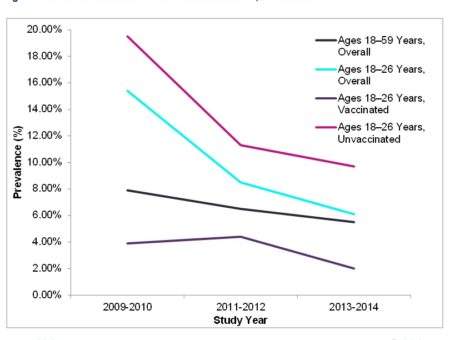 HPV is a group of over 150 viruses, many of which cause warts. HPV is transmitted by sexual contact and commonly infects the genitals and throat. Infections do not always cause symptoms; many people with HPV do not realise they are infected. The Centers for Disease Control and Prevention (CDC) estimate that approximately 80% of people get an HPV infection in their lifetime. HPV can also cause cancer in the throat and in female and male genitals. HPV causes an estimated 31,000 cancer cases in the US per year.

The HPV vaccine was introduced for females in the US in 2006. It protects against HPV strains that cause cervical cancer and genital warts. It is currently recommended for all boys and girls at ages 11 or 12 years old. The CDC estimates that the vaccination rate in teenagers in the US rose from 56.1% in 2015 to 60.4% in 2016.

The findings from this study suggest that the HPV vaccine has been effective at lowering prevalence of HPV infections in younger women in the US, even in unvaccinated women. A continued decrease in HPV prevalence in women would eventually result in a decrease in incidence of cervical cancer. However, since cervical cancer develops over a long period of time after HPV infection, these changes will not be observed for several years.

In order to further reduce future HPV-related cancers, physicians and health experts should emphasise the importance of the HPV vaccine to parents. Special focus should be placed on vaccinating boys and preteens living in rural areas, as HPV vaccination rates are much lower in these populations.

In-depth analyses of epidemiological trends in other infectious diseases and cancers are available at GlobalData’s Report Store.