Age-related macular degeneration (AMD) is a progressive eye condition characterised by the breakdown of the macula, a small area of the central retina that is responsible for central vision. AMD is the leading cause of significant irreversible vision loss among the elderly, affecting almost 72 million people in the seven major markets (7MM: US, France, Germany, Italy, Spain, UK and Japan).

There are two main types of this retinal disease: wet and dry AMD. Wet AMD develops when abnormal blood vessels grow beneath the macula, causing damage to the macular cells, while in dry AMD the build-up of waste products, called drusen, causes the deterioration of the macula. Although the progression of dry AMD is slower than wet AMD, dry AMD can also lead to central vision loss in the late stage of the disease, called geographic atrophy (GA), due to atrophy of photoreceptor cells.

Figure 1 presents the total prevalent cases of late AMD by subtype in the 7MM in 2016. 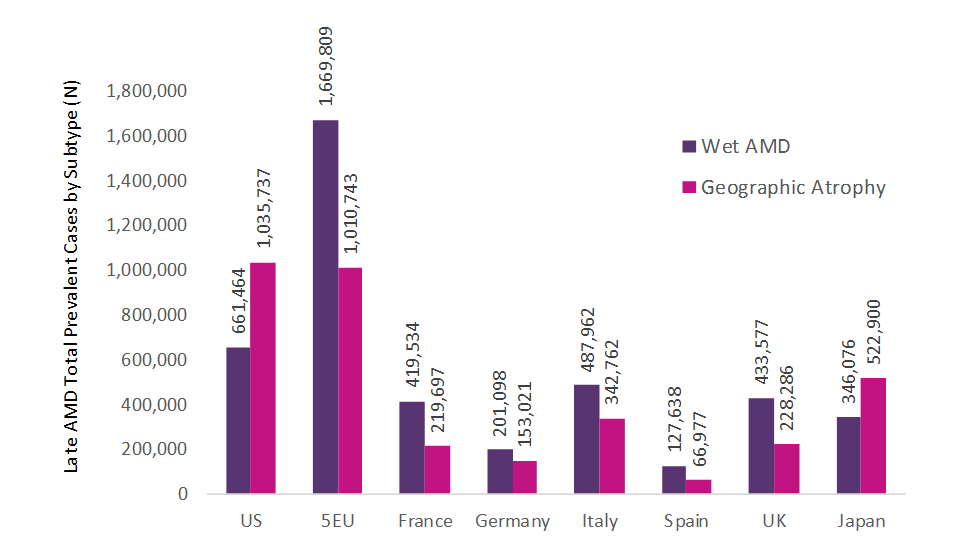 While anti-vascular endothelial growth factor (anti-VEGF) drugs have greatly improved the prognosis for wet AMD patients, there are currently no treatment options for GA.

GlobalData estimates that wet AMD drugs generated $4.9bn across the 7MM in 2016, composing 100% of the AMD market. The highest selling anti-VEGF drug in the AMD market was Bayer/Regeneron’s Eylea, which recorded sales of $2.9bn worldwide last year.

GlobalData anticipates that the launches of two longer-acting anti-VEGF therapies and two promising adjunctive therapies to anti-VEGFs, along with the rapidly aging population, will drive significant growth of the wet AMD space at a Compound Annual Growth Rate of 7.4% over the next decade.

Similarly to wet AMD, the dry AMD market segment is also promising to be lucrative, with the US generating by far the highest sales out of the 7MM. Four products are in late-stage development (Phase IIb/III) for GA, which could potentially launch within 10 years and profoundly expand the space to make up 42% of the total AMD market by 2026.