Spectrum’s poziotinib and Takeda’s mobocertinib have been associated with a higher degree of gastrointestinal and cutaneous toxicities that have been difficult to manage in clinical trials, which is expected to impede uptake potential if they get approved. Moreover, amivantamab showed a higher overall response rate (ORR), potentially due to its bispecific antibody approach, experts noted, providing potential for approval on the back of the Phase I CHRYSALIS data.

Janssen submitted a BLA for amivantamab’s use in patients whose disease has progressed on or after platinum-based chemotherapy, as per a 3 December release, based on the monotherapy arm of the 460-patient CHRYSALIS. The TKIs, though, are also being explored in Her2 exon 20 mutation NSCLC. However, even in that setting, experts noted the drugs’ toxicity profiles will significantly affect its uptake potential despite reported efficacy.

Spectrum announced 11 March it would submit an NDA based on cohort 2 of the 603-patient Phase II ZENITH20 study of  previously treated NSCLC with Her2 exon 20 insertion mutations, as per a 11 March release. In ZENITH20 NSCLC EGFR exon 20 mutation cohorts of previously treated and treatment-naïve patients, poziotinib did not meet the primary endpoint. However, Spectrum CMO Francois Lebel told this news service that cohort 5 is exploring a different dosing schedule and includes the NSCLC EGFR exon 20 mutation group. 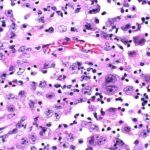 Takeda did not respond to a request for comment, but mobocertinib/chemotherapy is in a 318-patient Phase III frontline trial. A Johnson & Johnson (J&J) spokesperson referred to amivantamab data released at the World Conference for Lung Cancer (WCLC), noting robust activity, durable responses and a tolerable and manageable safety profile in EGFR exon 20 insertion mutation NSCLC; Janssen is a J&J company.

An analyst report estimates $328m for poziotinib in 2026. Estimated revenues for amivantamab and mobocertinib are $378m in 2029 and $685m in 2027, respectively, as per GlobalData consensus forecasts.

Given how resistant exon 20 insertion mutation tumours are to standard therapy, an ORR of 30–40% is clinically significant and will likely be viewed favourably by the FDA, said Dr Razelle Kurzrock, director, Centre for Personalised Cancer Therapy, University of California San Diego. As per the latest amivantamab update at WCLC, at a median follow-up of 6.5 months for 81 patients, the investigator-assessed ORR was 36% (abstract no. OA04.04).

The SOC for exon 20 mutations is chemotherapy, and prognosis is the same as those without any EGFR mutations, hence this ORR is considered significant, said an oncologist. According to a second analyst report, amivantamab data is sufficient for accelerated FDA approval, and its efficacy is the new bar for exon 20 disease.

Importantly, particularly from the uptake perspective, amivantamab is more tolerable than Spectrum’s and Takeda’s TKIs, said Dr Federico Cappuzzo, director, Oncology and Haematology Department, AUSL della Romagna-Ravenna, Italy. The cutaneous and gastrointestinal toxicities seen with poziotinib are very high, noted the oncologist, and while more data is needed with mobocertinib, even that seems less tolerable than amivantamab.

Poziotinib’s and mobocertinib’s toxicities are higher than what is expected even with second-generation EGFR TKIs, said the oncologist. On the other hand, the Grade 3/4 toxicities with amivantamab are lower than poziotinib’s and mobocertinib’s, said Cappuzzo. With amivantamab, Grade 3 or greater AEs were reported in 39% of patients, of which 14% were considered treatment-related. Of those, rash and infusion-related reactions were reported in 3% and 2% of patients, respectively.

However, for poziotinib, data from a ZENITH20 cohort testing an 8mg twice-daily dosing schedule for Her2 and EGFR exon 20 mutation NSCLC indicated a 30% reduction in Grade 3 or higher events compared to the 16mg daily dose, as per a 2 March release. Spectrum will submit this data as part of poziotinib’s NDA package, Lebel said but declined to comment on whether the initial label will include this dosing regimen. A trend toward improved responses was also observed with the 8mg BID dose, as per the March release.

Exon 20 insertion mutations create a small kinase pocket, and while approved EGFR TKIs do not fit in that pocket, poziotinib and others are designed to do so, explained Estrada-Bernal. On the other hand, the pocket structure does not matter for amivantamab’s activity, as the mAb is binding from outside the cell membrane, she said.

Hence, besides amivantamab’s mechanistic potential to generate efficacy because of the addition MET targeting, it also stands to benefit from being able to interfere with the dimerisation of EGFR receptor arms that are otherwise locked in the activated position as a result of the EGFR exon 20 insertion mutations. The dimerisation activates the kinase pocket, and a mAb like amivantamab can be effective by disrupting the activation, she explained. Kurzrock mentioned a similar effect was seen with the Eli Lilly’s Erbitux (cetuximab), approved in colorectal and head and neck cancers.

Both Cappuzzo and the oncologist also remarked on the greater potential with antibody-drug conjugates (ADCs) like AstraZeneca/Daiichi Sankyo’s Enhertu (trastuzumab deruxtecan) in Her2 mutated NSCLC, which includes exon 20 mutations. In a Phase II study, among the 18 pretreated Her2-mutated NSCLC patients, an ORR of 55.6% and a median progression-free survival (PFS) of 11.3 months was reported. Her2 exon 20 mutations were the most common alteration, seen in eight of the 18 patients (Tsurutani, et al, Cancer Discov . 2020 May;10(5):688-701). The PFS is comparable to standard chemotherapy or immunotherapy in this patient population, and ORR is impressive in a heavily pretreated population, said Cappuzzo.

However, poziotinib is specifically focused on Her2 exon 20 insertion mutations, which are tougher to treat than point mutations, said Spectrum’s Lebel, adding lung toxicities were observed with the ADC. Grade 3 and Grade 1 pneumonitis was observed in one and three patients, respectively, among 59 treated in the Phase II Enhertu study. Enhertu is now being explored in a Phase II Her2 mutated NSCLC study that enrolled its first patient earlier this month.

Manasi Vaidya is a Senior Reporter for Clinical Trials Arena parent company GlobalData’s investigative journalism team. A version of this article originally appeared on the Insights module of GlobalData’s Pharmaceutical Intelligence Center. To access more articles like this, visit GlobalData.