Crohn’s disease (CD) is an inflammatory bowel disease (IBD) characterized by chronic inflammation of the gut. While any part of the gut can be affected, inflammation is most commonly found at the end of the small intestine (ileum), and the start of the large intestine (colon). The experience of each individual affected is different; however, common symptoms of CD include rectal bleeding, diarrhea, fatigue, weight loss, and stomach cramps. The disease course of CD is characterized by periods of normality with no symptoms followed by periods of relapse, the length and severity of which differ from case to case. Inflammation in CD can result in severe scarring and narrowing of parts of the gut. Although most of CD is of the mild or moderate variety, CD in some cases is severe to fulminant, requiring monitoring and symptoms management. 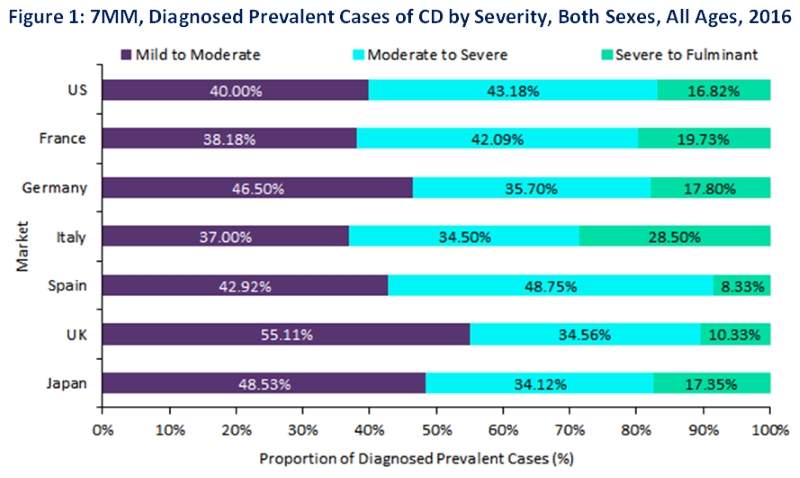 There are currently no medications or surgical procedures that can cure CD. Treatment goals include managing symptoms, maintaining remission and preventing relapse. Over time, inflammation can damage sections of the digestive system, resulting in complications such as narrowing of the intestine (stricture), or a channel developing between the end of the bowel and the skin near the anus or vagina (fistula). These problems usually require surgical treatment. The forecast by GlobalData epidemiologists finds that most CD cases are of the mild to moderate or moderate to severe varieties. Even though the severe to fulminant variety of CD is less common, suffering for individuals with this condition might be unbearable. As CD is a chronic and usually debilitating condition, individuals most at risk should be monitored to provide best adequate treatment and prophylactic measures to prevent severe to fulminant flare-up of the disease.