The burden of melanoma of the skin is expected to grow in men and women, ages 18 years and older between 2016 and 2026 in the seven major markets (7MM: US, France, Germany, Italy, Spain, UK, and Australia). GlobalData epidemiologists forecast an increase in the number of diagnosed incident cases, most notably in the US. Figure 1 presents the expected changes in the 7MM from 2016 to 2026. 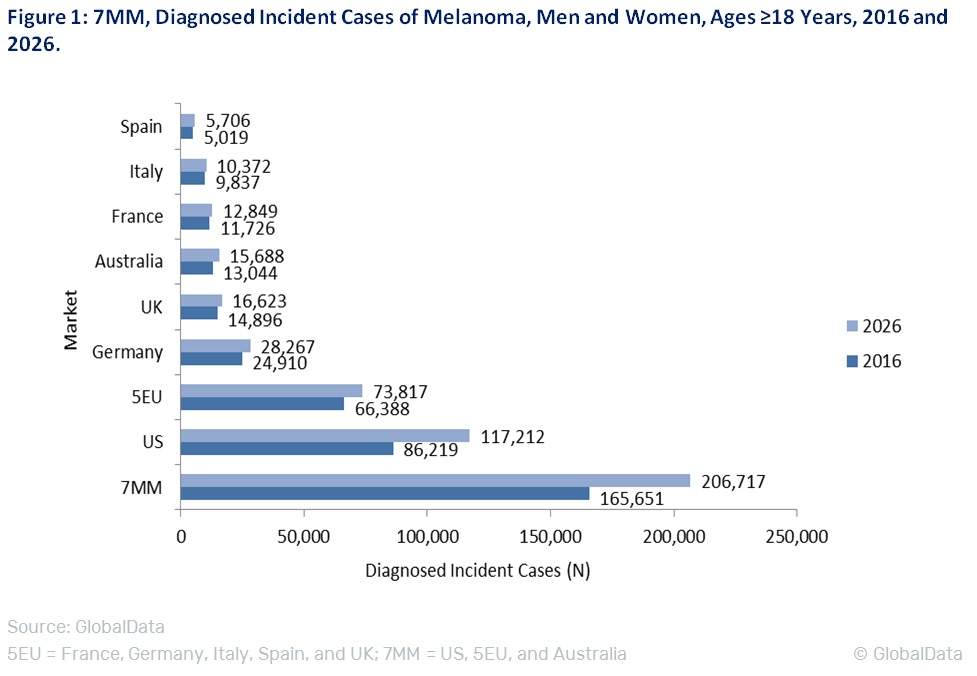 Melanoma is a malignant neoplasm of melanocytes, the pigment cells in the skin located on the epidermis, the most superficial layer of skin. Non-cutaneous melanomas, which typically occur in the eye and mucosa, account for only 4–5% of primary melanomas. However, melanoma of the skin is the deadliest form of skin cancer. Melanoma is considered an aggressive form of cancer, but if caught early it can be treated very successfully. Melanoma is one of the most common cancer types in the US, and is considered the national cancer of Australia. Melanoma typically presents as a mole (nevus) on the skin, and is characterised by the growth’s asymmetry, irregular border, color variation, diameter greater than 6mm, and evolution in appearance over a few weeks or months; these five diagnostic characteristics are known collectively by the acronym ABCDE. Melanoma is a global disease affecting all populations around the world. The risk of developing melanoma increases significantly in areas of high ultraviolet (UV) exposure and where fair complexions are more common.

In the 7MM, GlobalData epidemiologists forecast the diagnosed incident cases of melanoma of the skin in men and women, ages 18 years and older, to increase from 165,651 cases in 2016 to 206,717 cases in 2026, at an Annual Growth Rate (AGR) of 2.48%. All markets in this forecast are expected to see an increase in the number of incident melanoma cases, although the US and Australia are anticipated to have significantly higher growth than the five EU markets. The highest rate of growth is also expected to be seen in the US with an AGR of 3.59%. Australia has the second highest AGR at 2.03%, while the five EU markets combined have an AGR of 1.12% from 2016–2026.