Systemic presentation of plaque psoriasis can vary by skin tone, which presents diagnostic challenges to physicians and as a result, individuals with darker skin tones are likely underdiagnosed in the US. This trend may negatively impact the quality of life and cost billions in lost productivity while also reducing the size of the plaque psoriasis market by over 89,000 cases.

According to GlobalData’s upcoming report ‘Plaque Psoriasis: Epidemiology Forecast to 2030,’ the number of cases in the US is expected to increase at an annual growth rate of 0.93% between 2020 and 2030. This translates to 7,477,000 cases in 2020 and 8,171,000 by 2030. Plaque psoriasis makes up 85% of psoriasis regardless of race and is characterised by red, flaky and itchy raised plaques that can also be painful. Among darker skin tones, however, the clinical manifestations can differ as plaques can appear more violaceous (darker/more purple) as opposed to erythematous (red) and plaques may also be thicker. As a result, while psoriasis is more common in people with European ancestry, it is also likely underdiagnosed in non-whites.

In a 2009–2010 NHANES analysis of psoriasis prevalence from Rachakonda and colleagues published in the Journal of the American Academy of Dermatology, the prevalence of psoriasis was 3.6% in White Americans compared with 1.6% in Hispanics and 1.9% in Blacks. However, in a study in the same journal, Kurd and Gelfand found that patients with undiagnosed psoriasis in the 2004 NHANES survey were more likely to be non-white. Using data from this study, the estimated proportion of Blacks with psoriasis increased from 8.0% to 12.2% after the files were assessed positively for psoriasis by two dermatologists. Similarly, the prevalence of psoriasis for Hispanics increased from 6.5% to 7.9%. While the exact proportions of underdiagnosed Hispanic and Black Americans are difficult to assess and few population-based studies are available outside of North America and Europe to benchmark the data, using the increased proportion of diagnosed cases in Kurd and Gelfand would result in an estimated 89,000 additional cases in 2020 alone. This represents roughly 6% of the current population with diagnosed psoriasis. 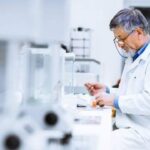