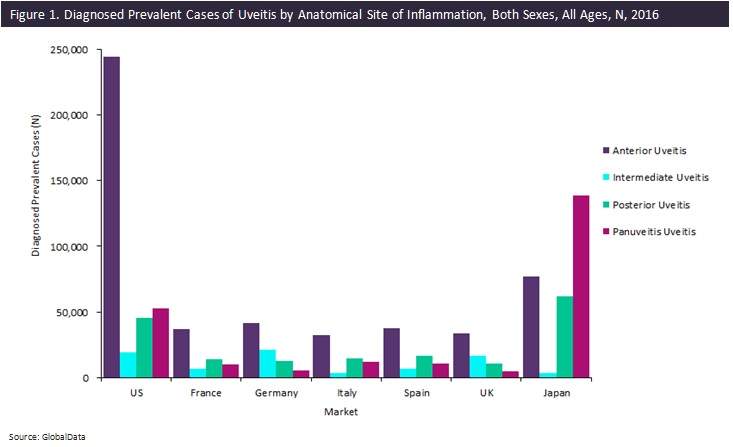 Uveitis is inflammation of the uveal tract (iris, ciliary body, and choroid) that can also cause the inflammation of nearby tissues, such as the retina, optic nerve, and vitreous humor.

Uveitis is an important cause of blindness and visual loss in many countries. Anatomically, uveitis is classified by the main site of inflammation as anterior uveitis, intermediate uveitis, posterior uveitis, or panuveitis.

Out of the seven major pharmaceutical markets (7MM: US, France, Germany, Italy, Spain, UK, and Japan) in 2016, GlobalData epidemiologists found that Japan had a notably different anatomical distribution of uveitis compared to the remaining 7MM. Anterior uveitis was the most common form of uveitis in most of the major markets, except Japan, where the primary form of uveitis was panuveitis (as shown in Figure 1). In fact, panuveitis accounted for approximately 50% of all uveitis cases in Japan, but only ranged from approximately 10–20% in the US and major European markets.

This difference in the percentage of panuveitis cases has led some researchers to question whether Japan is simply an outlier, or whether there is a more specific cause for this distribution.

Current research indicates that in Japan, the high prevalence of Vogt-Koyanagi-Harada (VKH) disease, a rare autoimmune disease, is likely the source of the aforementioned differences. According to the National Institutes of Health, one of the most common symptoms of VKH includes panuveitis.

Furthermore, in an article published in 2016 in the Orphanet Journal of Rare Diseases, the incidence of VKH among uveitis cases was 7% in Japan, 1–4% in the US, and 3% in Brazil.

Future research efforts aimed at improving early diagnosis and treatment options for VKH in Japan will likely result in a shift in the main anatomical site of uveitis, indicating a distribution that it is more in line with what is observed in the other major pharmaceutical markets.