Over the course of 2017, the acute myeloid leukemia (AML) market has experienced dramatic changes with the approval of various targeted therapies, such as fms-like tyrosine kinase 3 (FLT3), isocitrate dehydrogenase (IDH)1/2, and CD33 inhibitors. Pfizer’s Mylotarg (gemtuzumab ozogamicin) is an anti-CD33 antibody drug conjugate (ADC) that was withdrawn from the US market for toxicity concerns for seven years, but is now being reintroduced as therapy for AML patients. 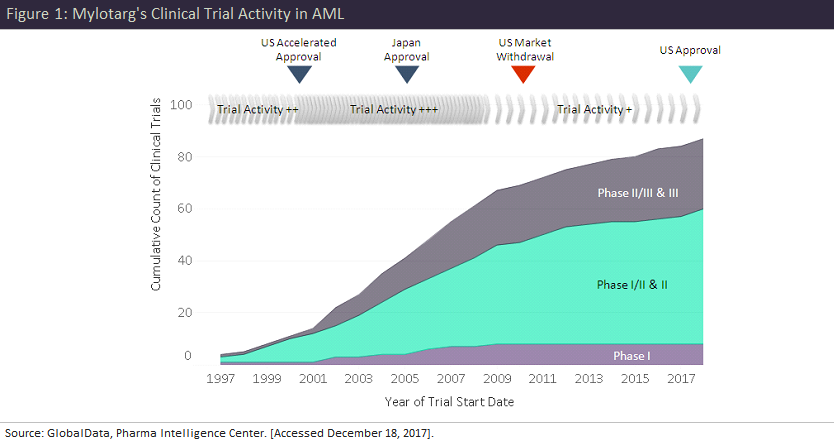 The analysis of the number of starting clinical trials over 20 years of Mylotarg’s development highlights three distinct periods: 1) Prior to the accelerated approval in the US, with a modest growth in clinical trials; 2) Between the US accelerated approval and its US withdrawal, with the highest clinical activity; 3) Finally, a seven-year period before the new approval of Mylotarg in the US, showing a slow increase in clinical trial numbers. Since Mylotarg initially received accelerated approval in the US, 26 additional Phase III trials were initiated to identify its most appropriate dosing regimen, a different schedule in combination with chemotherapy or on its own, and a new patient population. GlobalData anticipates Mylotarg to be approved in H1 2018 in the EU, which will expand the use of Pfizer’s ADC across additional markets.