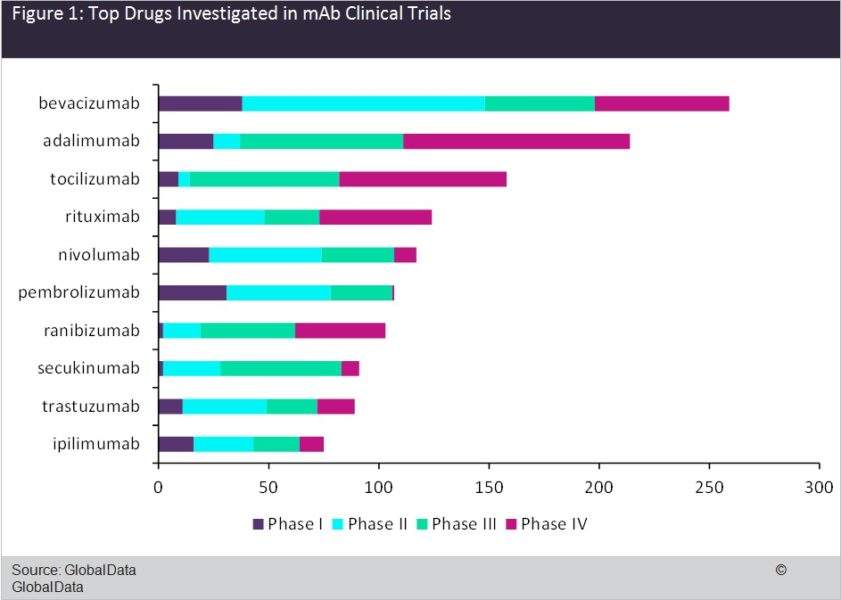 As part of our series of white papers tracking clinical trial activity across the world, GlobalData recently compiled a summary of global clinical trials in monoclonal antibodies (mAbs). GlobalData identified 5,273 industry clinical trials with a start date between January 1, 2007, and December 31, 2016.

GlobalData analysed the dataset to identify the top drugs investigated in industry-sponsored clinical trials in mAbs. The top three drugs were bevacizumab, adalimumab, and tocilizumab. These were followed by rituximab, nivolumab, pembrolizumab, ranibizumab, secukinumab, trastuzumab, and ipilimumab. All the top ten drugs are marketed and the majority of the trials initiated for these drugs were Phase III trials, closely followed by Phase IV and Phase II, as shown in Figure 1. However, the largest share of bevacizumab trials were in Phase II, with 35% of trials occurring in indications for which the drug has not yet been approved.

EASD 2020: Results from the TIMES 3 trial – efficacy and safety of imeglimin in combination with insulin in Japanese patients with type 2 diabetes