Alzheimer’s disease (AD) is a subtype of dementia and is an irreversible neurodegenerative brain disease of the elderly, characterised by the death of brain cells, which leads to a progressive decline in memory and cognitive abilities such as thinking, language, and learning capacity. GlobalData’s epidemiological analysis of AD found that the majority of the total prevalent cases in the seven major markets (7MM: US, France, Germany, Italy, Spain, UK, and Japan) are women. However, the exact cause of this skew towards women is currently unclear.

The figure below presents the total prevalent cases of AD in the 7MM by sex, in those ages 60 years and older. In the 7MM as a whole, women make up 7.62 million cases while men make up only 2.98 million cases, corresponding to a 72% to 28% split between the sexes. This trend of higher proportion of cases in women is consistent throughout each of the 7MM. 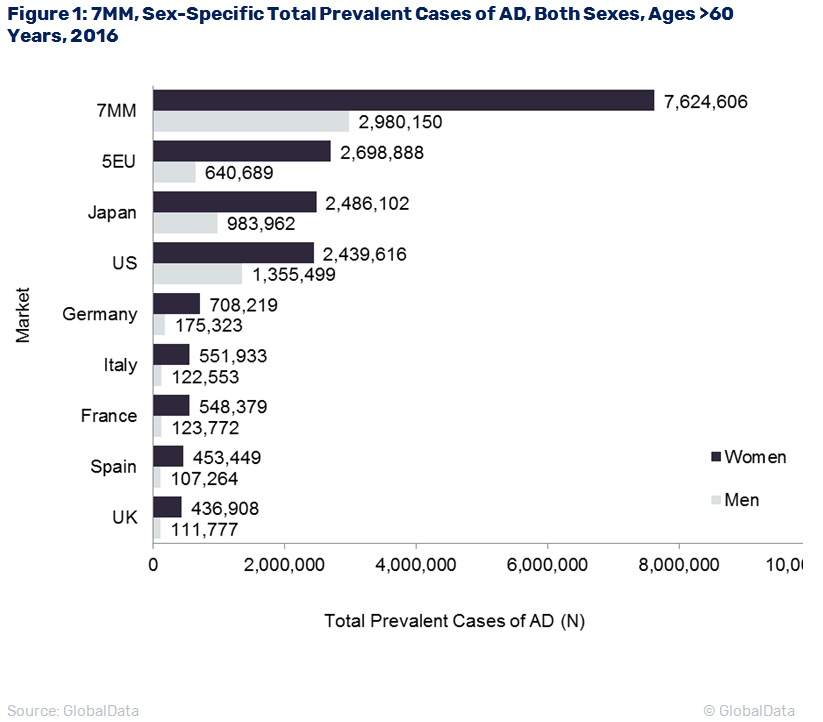 The most common explanation of this skew towards women is that women tend to live longer than men, and since AD prevalence increases with age, more women would develop the disease. However, when looking at incidence rates, women still have higher rates than men of the same age. Other studies suggest that development of AD is related to heart disease, and since women have a higher risk of heart disease, AD risk also is higher. Current studies are looking into whether biological and lifestyle factor differences between men and women can explain the large difference in prevalent cases between the sexes.

For more details about the epidemiology of AD, please see the EpiCast Reports.