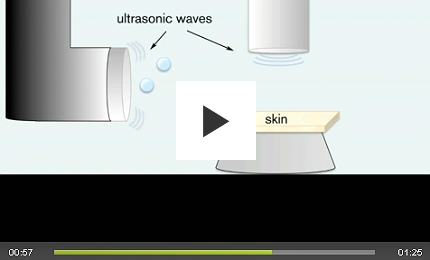 Since the late 1970s transdermal patches have been used as an alternative to other forms of drug delivery, such as oral pills and injections. Offering benefits that include direct to area pain relief, controlled drug release and the avoidance of invasive injections, transdermol drug delivery has always been considered a useful, if limited, drug delivery tool.

First generation transdermal patches are generally restricted to delivering drugs with only small molecular formations from patch to skin, with large molecules being too big to permeate the skin, which limits type of drugs patches can administer. Also, patches cannot omit drugs instantaneously like an injection, meaning drugs that need to get into the blood immediately are not suitable for transdermal patches.

Currently, the most common patches available are nicotine patches, hormone patches, contraception patches and opioid patches – which provide around the clock pain relief.

However, the next generation of transdermal patches currently being developed addresses these shortcomings; they are faster, more precise and may even be able to deliver drugs with a larger molecular size, opening up patches to the whole of the drug market.

A research team at the Massachusetts Institute of Technology (MIT) in the US say they have developed a new technique using ultrasound waves that painlessly erodes several layers of the skin increasing permeability and allowing bigger drug molecules to pass through.

MIT graduate student in chemical engineering and co-author of the MIT study, Carl Magnus Schoellhammer, explains that when applying high and low ultrasound waves to the skin with any fluid, usually water, cavitation occurs. Cavitation causes gas bubbles to move around chaotically and swirl in the fluid on the skin, eventually becoming unstable and exploding, causing little jets of fluid to hit the skin and painlessly erode several layers causing it to become more permeable. When this technique is used before the application of a transdermal patch it allows drugs with larger molecules, such as insulin, to pass through the skin effectively.

Though in early stages of development, Schoellhammer says the end goal of this research is to "build a hand help prototype" that can be used on the skin prior to patch application or contain a drug inside the devise for simultaneous drug delivery, although this method has not yet been tested yet.

Schoellhammer says this new technology could make life for people living with diabetes – who often have to inject themselves daily – more easy: "Diabetics have to give themselves injections fairly often, if they can now start replacing that every so often using this device, I am sure that would be popular."

Schoellhammer and his colleague Dr POLAT developed this new research by advancing on the work of MIT researchers Prof. Robert Langer and Prof. Daniel Blankschtein in the early 90s, who originally pioneered the use of low frequency ultrasound to aid transdermal drug delivery. Their method is suitable for only small molecular drugs and can result in sporadic permeability of the area, as the cavitation that occurs is less predictable.

Schoellhammer says they decided to add high frequency ultrasound waves to the low ultrasound waves on the skin, effectively making the cavitation that occurs more fierce but also more predictable.

He says: "What it does, is it nucleates additional bubbles that can then implode under the influence of the low frequency horn. But also the pressure wave it generates actually holds the bubbles in position, so it limits their lateral motion, so it’s more uniform. The bubbles are imploding over the entire area being treated rather than in a random fashion."

This method has been tested against pig skin and Schoellhammer says it has so far proved reliable: "We showed delivery of just two molecule compounds so, glucose and inulin, the carbohydrate which is a similar size to insulin."

Schoellhammer admits this new research cannot deliver drugs as fast as an injection. However, he says: "Without any pre-treatment of the skin you’re limited to really small molecules that can naturally get through and that limits any patch you can have."

However, Schoellhammer’s and Polat’s research is just one of a number of new developments in the quest for a worthy next generation patch.

Patch delivery as fast as an injection

Another is Zosano’s Phase III ZP-PTH rapid delivery patch developed for the treatment of severe osteoporosis. Zosano say the patch can deliver a drug in a very similar way to a subcutaneous injection. Brian Rippie, who works in Buisness Development at Zosano, explains: "Instead of one needle, we have 1,400 micro-needles that penetrate the top layers of the skin and get into the dermis, they are actually coated with drugs but because it is at a different access point the drug is going to come off the micro-needle really quickly."

"When this technique is used before the application of a transdermal patch it allows drugs with larger molecules to pass through the skin."

Rippe says that transdermal drug delivery patches such as the ZP-PTH rapid delivery patch, shows one benefit of transdermal delivery which is being able to bridge the gap between fast pain relief, via an injection, or slower pain relief via oral pills, such as migraine pain medication, which can be administered either way.

A patch would deliver the drug as quick as the injection, so no waiting for oral pills to take effect, but be much more comfortable and convenient, meaning people won’t have to choose between comfort and speed. Rippie says: "Alternative drug delivery like transdermal strives to achieve a better patient experience which potentially increases compliance and improves therapeutic outcomes."

Currently the marketed PTH drug has to be injected daily, which Rippie says is a barrier to physician / patient product adoption as currently only eight percent of severe osteoporosis patients are treated with PTH, which is considered to be the last line of defense.

Zosano Pharma intends to have the ZP Patch Technology for PTH available in Asia and be near commercialisation for both the US / European markets soon. 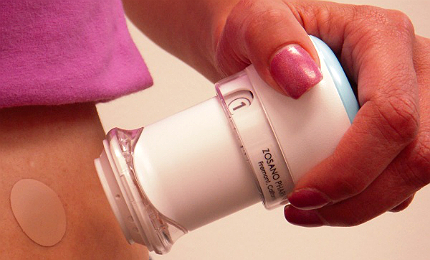 Replacing hypodermic needles with patches has many benefits and is not just for needle-phobics or an alternative for people who have to inject themselves daily, it has general cost and safety benefits as well.

According to Schoellhammer: "You don’t need to dispose of needles, reducing accidental needle sticks; that generates hundreds of thousands of millions of dollars a year additional medical treatment."

Furthermore Rippie believes it can also have a more commercial advantage for pharmaceutical companies. He says: "In some cases it’s going to be a way that drug companies can differentiate themselves from drugs in the same class, everybody else has a needle and I have this patient centric delivery system that is easy to use and also pain free."

"Zosano say the patch can deliver a drug in a very similar way to a subcutaneous injection."

With a new generation of transdermal drug delivery systems currently being designed and tested, patches could become a more prominent contender in the drug delivery market.

As both Zosano and MIT have identified, replacing the needle with the patch is the key way to bringing the transdermal patch to the forefront of the drug delivery market.

Rippie says: "Within the needle phobic population, obviously a transdermal delivery solution would be very well received. Many just have a strong preference against needles and if there is an alternative, would they take it? I believe the answer is yes."

As developments progress, perhaps sometime in the future transdermal drug delivery systems such as Zosano’s ZP Patch Technology and MIT’s ultrasound technology, which is soon to undergo safety testing, could work together to achieve both super fast and larger molecular drug delivery, potentially eliminating the need for invasive injections altogether.

Cancer rates are rising sharply just as healthcare providers are being asked to implement enormous efficiency savings, making innovation crucial to the future of cancer care.