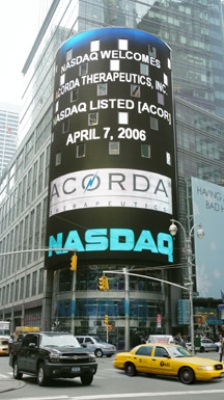 US-based biotechnology company Acorda Therapeutics has reported that data from a Phase llb clinical trial of CVT-301 has demonstrated that people with Parkinson’s disease (PD) experiencing ‘off periods’ and treated with CVT-301 witnessed better improvements in motor function than those given placebo.

During the trial, a treatment effect was found to be evident at ten minutes after dosing and was continued for at least one hour, which is the longest time point patients were evaluated for.

Currently, Acorda Therapeutics is developing CVT-301 to treat ‘off periods’ in people with PD.

‘Off periods’ are considered as a re-emergence of PD symptoms, such as motor symptoms including the impaired ability to move, muscle stiffness and tremor.

This re-emergence can happen even when treatment regimens of oral levodopa (L-dopa) and other standard of care medications are being optimised.

Henry Ford Hospital PD and movement disorders programme director and lead author of the study Peter LeWitt said: "Oral levodopa is a cornerstone of Parkinson’s disease treatment, but after chronic therapy, approximately half of people with PD who are treated with oral L-dopa experience ‘off periods’.

"’Off periods’ tend to increase in frequency, severity and duration during the course of the disease, and are among the most challenging experiences for people with this disorder.

"Based on the data from this Phase IIb clinical study, CVT-301 has the potential to restore motor function to people with Parkinson’s disease when they experience ‘off periods’, and this is now being studied in a Phase lll clinical trial."

Around 86 people with PD are being involved in this randomised, double blind, placebo-controlled, multicentre Phase llb trial.

In the trial, participants were randomised to self-administer CVT-301 or placebo to the lung through an inhaler, as an adjunct to their established oral PD medications.

"Off periods’ tend to increase in frequency, severity and duration during the course of the disease, and are among the most challenging experiences for people with this disorder."

Participants were given 35mg of CVT-301 or placebo in study weeks one and two, and 50mg of drug or placebo in third and fourth weeks of the study.

The UPDRS is an evaluation method to observe PD motor impairment that has been used widely in clinical research.

In the study, subjects receiving CVT-301 demonstrated a statistically significant and clinically important drop in average UPDRS III score compared to placebo and across all measured time points starting at ten and up to 60 minutes post-administration.

There were no major safety signals found in either CVT-301 dose group, with no increase relative to placebo in troublesome or non-troublesome dyskinesias during ON periods.

In addition, there were no serious adverse events noticed in the drug group and the incidence of drug-related adverse events was similar between treatment group, 23% drug group, and 21% placebo group.