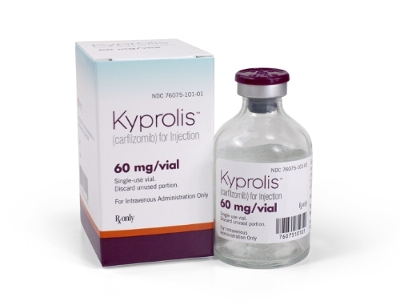 "Demonstrating superiority over Velcade in this head-to-head trial supports our goal of ensuring continued improvement of patient outcomes and potentially establishing Kyprolis as the backbone of therapy for patients with multiple myeloma."

The trial showed that multiple myeloma patients treated with Kyprolis lived twice as long without their disease worsening as well as showed statistically and clinically significant superiority over Velcade.

"Demonstrating superiority over Velcade in this head-to-head trial supports our goal of ensuring continued improvement of patient outcomes and potentially establishing Kyprolis as the backbone of therapy for patients with multiple myeloma."

During the trial, Kyprolis combination showed superiority over the Velcade combination for secondary objectives of higher overall response rate and lower neuropathy events.

The company said that treatment discontinuation due to adverse events and on-study deaths were comparable between the two arms, while the rates of cardiac failure and renal failure for Kyprolis were comparable to those observed in the Phase III ASPIRE trial.

In the ENDEAVOR trial, the rates for cardiac and renal failure were higher in the Kyprolis arm versus the Velcade arm, while there was an increase in the incidence of hypertension and dyspnea in the Kyprolis arm compared to Velcade and that observed in the ASPIRE trial.

The trial is the first of two head-to-head studies for Kyprolis versus Velcade, an established proteasome inhibitor, currently approved to treat multiple myeloma.

The trial’s primary endpoint was PFS, defined as the time from treatment initiation to disease progression or death.

In the US, Kyprolis is marketed by Onyx Pharmaceuticals, which also holds development and commercialisation rights to the product globally, excluding Japan.