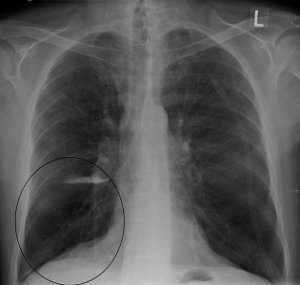 The study called Flagship trial is being carried out at outpatient clinics across Northern and Central Europe to assess the safety and efficacy of AQX-1125 in about 350-400 unstable moderate to severe COPD patients with a history of frequent exacerbations.

The company received regulatory approval to conduct the trial in four countries and it expects to release top-line results before the end of 2014.

Aquinox president and CEO David Main said COPD currently affects about 600 million people worldwide, with estimates of the number of people suffering from the moderate and severe forms that most frequently require treatment ranging from 65 million to in excess of 200 million.

"It is estimated that over 20% of patients die within one year of a hospital-treated severe exacerbation and as much as 66% die within three years," Main said.

"Since exacerbations involve airway inflammation, treatment with potent anti-inflammatories that reduce the recruitment of immune cells to the lungs is potentially a promising strategy to reduce exacerbations."

"Since exacerbations involve airway inflammation, treatment with potent anti-inflammatories that reduce the recruitment of immune cells to the lungs is potentially a promising strategy to reduce exacerbations."

The FLAGSHIP trial is designed to evaluate AQX-1125’s ability to reduce the effects of exacerbations in COPD patients in a 13-week period.

The primary endpoint of the trial is the change in the severity, duration and reoccurrence of exacerbations in patients treated with AQX-1125 versus placebo, as measured by EXACT, a patient-reported outcome tool that measures symptoms.

Aquinox senior vice-president of clinical development and chief medical officer Stephen Shrewsbury said: "The FLAGSHIP trial has been designed to target COPD patients in greatest need and that could benefit from oral anti-inflammatory therapy to improve recovery from an exacerbation and to prevent subsequent ones."

COPD is a lung disease related with cigarette smoking and air pollution, and is characterised by progressive loss of lung function and chronic inflammation of the airways.