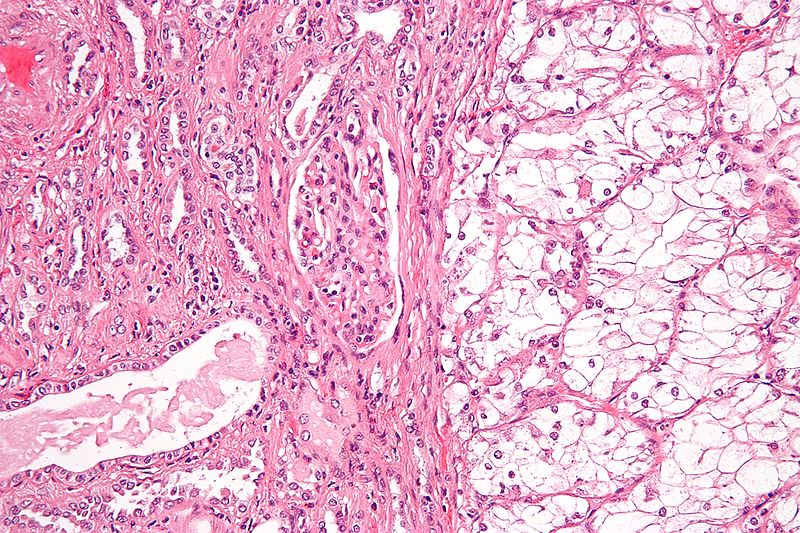 Exelixis has reported the preliminary data from a cohort of heavily pretreated patients with metastatic refractory renal cell carcinoma (RCC) participating in an ongoing Phase 1b trial of Cabozantinib.

Cabozantinib is a potent, dual inhibitor of MET and VEGFR2, and provides coordinated inhibition of metastasis and angiogenesis to kill tumour cells while blocking their escape pathways.

Patients in the trial received 140mg of oral Cabozantinib administered daily, with the endpoints including safety, tolerability and anti-tumour activity.

The trial demonstrated that tumour regression was observed in 19 of 21 patients with =1 post-baseline assessment, 7 of 25 patients showed a confirmed partial response (PR), and 13 additional patients had stable disease (SD).

Only a single patient reported evidence of primary refractoriness to Cabozantinib with a best overall response of progressive disease.

"Additionally, the bone scan response and reduction in narcotic usage in two of the four patients with bone metastases are consistent with the positive effects that we have observed for Cabozantinib with respect to bone lesions in patients with castration-resistant prostate cancer and metastatic breast cancer.”

He added: ”The data presented today support continued study of Cabozantinib in patients with advanced RCC, and we hope to pursue such studies as part of our recently announced Cooperative Research and Development Agreement with the National Cancer Institute’s Cancer Therapy and Evaluation Programme."

Toni K. Choueiri, M.D., Director of the Kidney Cancer Center at the Dana-Farber Cancer Institute, said: "These data indicate that Cabozantinib can provide clinical benefit to patients with advanced RCC, including those who have received anti-VEGF therapy, anti-mTOR therapy, or a sequence of these targeted therapies."

Image: Micrograph of the most common type of renal cell carcinoma (clear cell) – on right of the image; non-tumour kidney is on the left of the image. Photo: Nephron.