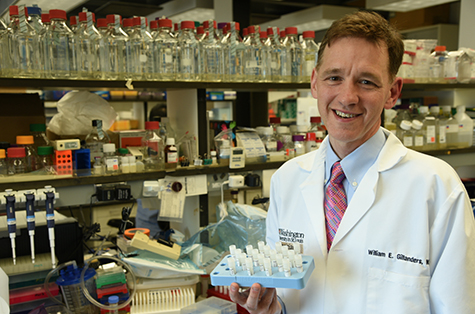 Researchers at Washington University School of Medicine in St. Louis, US, have reported preliminary data from a small clinical trial of a new breast cancer vaccine.

The new vaccine causes the body’s immune system to home in on a protein called mammaglobin-A, found almost in breast tissue.

Gillanders said: "Being able to target mammaglobin is exciting because it is expressed broadly in up to 80% of breast cancers, but not at meaningful levels in other tissues.

"The new vaccine causes the body’s immune system to home in on a protein called mammaglobin-A, found almost in breast tissue."

"In theory, this means we could treat a large number of breast cancer patients with potentially fewer side effects.

"It’s also exciting to see this work progress from identifying the importance of mammaglobin-A, to designing a therapeutic agent, manufacturing it and giving it to patients, all by investigators at Washington University."

The new vaccine primes a type of white blood cell, part of the body’s adaptive immune system, to seek out and destroy cells with the mammaglobin-A protein.

In the smaller proportion of breast cancer patients whose tumours do not produce mammaglobin-A, this vaccine would not be effective.

In the Phase I trial, 14 patients with metastatic breast cancer that expressed mammaglobin-A were vaccinated.

Gillanders said: "Despite the weakened immune systems in these patients, we did observe a biologic response to the vaccine while analysing immune cells in their blood samples.

Based on these results, Gillanders and his team are planning a larger clinical trial to test the vaccine in newly diagnosed breast cancer patients, who, in theory, should have more robust immune systems than patients who already have undergone extensive cancer therapy.