The Institute of Cancer Research (ICR), London, has reported that Replimune’s RP2, a new genetically engineered herpes simplex virus (HSV), has been shown to combat advanced cancers in initial data from a Phase I clinical trial.

In the trial underway, researchers at the ICR and The Royal Marsden NHS Foundation Trust analysed the modified version of the virus alone in nine patients, and along with immunotherapy nivolumab in 30 subjects initially.

Trial subjects had advanced cancers including oesophageal, skin, and head and neck cancer. They were either unresponsive to, or ineligible for, standard-of-care therapies.

Sponsored by Replimune, the trial is assessing the safety and dosage of RP2, as well the drug’s potential to shrink tumours. 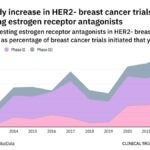 According to the findings, three out of nine patients who received RP2 alone showed benefits and had tumour shrinkage.

The tumour of a salivary gland cancer patient disappeared fully, who is cancer-free 15 months from the start of the treatment.

Seven out of 30 subjects treated with RP2 plus nivolumab also showed benefits after receiving RP2. Among these patients, six were found to be progression-free at 14 months.

RP2 offers dual action against tumours. It replicates inside tumour cells to rupture them from inside and also hinders the CTLA-4 protein.

The Institute of Cancer Research, London Biological Cancer Therapies professor Kevin Harrington said: “Our study shows that a genetically engineered, cancer-killing virus can deliver a one-two punch against tumours, directly destroying cancer cells from within while also calling in the immune system against them.

“Our initial trial findings suggest that a genetically engineered form of the herpes virus could potentially become a new treatment option for some patients with advanced cancers, including those who haven’t responded to other forms of immunotherapy.”

In October 2019, Replimune began a Phase I trial of RP2 to treat advanced solid tumours.