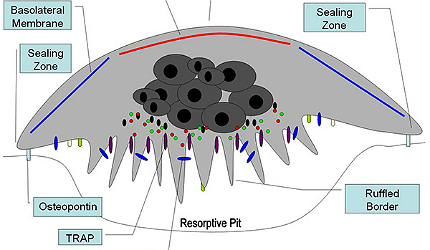 The drug was originally developed by Sanofi-Aventis and Procter & Gamble (P&G). Warner Chilcott acquired the patent for the drug in October 2009. Actonel is approved for use in the US, Europe and several other countries.

In October 2010, the US Food and Drug Administration (FDA) approved a new once-a-month version of actonel. The new formulation is being marketed under the trade name Atelvia.

"Warner Chilcott acquired the patent for the drug in 2009. Actonel is approved for use in the US, Europe and several other countries."

This condition puts patients at increased risk of fractures, mainly of the spine, hip and wrist. It can occur both in men and women, but is more common in women after the menopause.

Osteoporosis affects one in every four women and at least one in eight men over the age of 50 years old. Nearly 40% of women aged over 50 are at risk of osteoporosis related fractures.

Use of actonel for treating osteoporosis in women and men

Actonel contains risedronate sodium, which is a potent antiresorptive agent. It is a pyridinyl-bisphosphonate with high affinity for hydroxyapatite crystals in the bone.

Osteoclasts and osteoblasts are two cells which play a key role in maintaining the right balance of bone tissue in the body.

Osteoclasts are responsible for bone resorption, while osteoblasts help in the formation of bone. Actonel regulates this imbalance by inhibiting the activity of osteoclasts.

Actonel has been studied in more than 5,000 women recruited for Phase III clinical trials. Four pivotal studies tested the efficacy of the drug in preventing fractures in post-menopausal women and the drug’s ability to improve BMD.

Efficacy of actonel in treating fractures was demonstrated in two large randomised, double blind studies. Nearly 4,000 women were recruited for the studies. One study was conducted in Europe and Australia and the second in North America. The studies established that actonel was effective in reducing fracture incidents in patients.

Actonel also demonstrated its efficacy in improving the BMD in post-menopausal women, in two trials. Around 1,200 women were recruited for the trials, which compared actonel with a placebo. After six months of treatment, patients administered with actonel demonstrated a significant increase in bone mass in the lumbar spine.

Other studies conducted on actonel tested the efficacy of various doses on improving BMD in osteoporosis affected women and men. Efficacy of actonel in men was tested in a two-year placebo-controlled, multicentre study, which recruited 284 patients.

"The market for osteoporosis drugs is one of the biggest, with sales expected to reach $11.45bn by 2015."

Sales of actonel, however, have been falling mainly due to loss of exclusivity in Western Europe and a decline in prescriptions in the bisphosphonate market.

A generic version of the drug was approved by the FDA in 2007, which has further affected sales. In the US, actonel sales during the first quarter of 2012 declined by 47%, compared to the same quarter during the last year.

In May 2012, results of a new study conducted by the University Hospitals of Geneva in Switzerland have indicated that prolonged use of drugs like Fosamax and actonel can lead to atypical fractures. If the results of these studies are proved on a larger scale, sales of actonel are expected to be further affected.

The decline in sales of actonel is expected to be offset by the new formulation atelvia, which was launched in early 2011 in the US. At the end of the first quarter of 2012, atelvia generated $16m in sales.