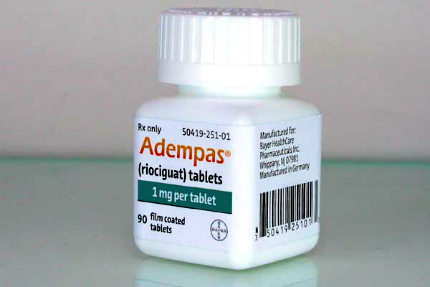 Bayer received approval for Adempas from the US Food and Drug Administration (FDA) for treatment of adult patients suffering from chronic thromboembolic pulmonary hypertension (CTEPH) and pulmonary arterial hypertension (PAH) in October 2013.

Pulmonary hypertension is a rare fatal lung disorder characterised by an increase in blood pressure in the artery, vein or capillaries. It leads to decreased exercise tolerance and heart failure. The symptoms of the disease include shortness of breath, dizziness, fainting and leg swelling.

Adempas is the stimulator of soluble guanylate cyclase (sGC). The drug consists of nitric oxide (NO), which helps to widen the blood vessels. The drug also stimulates sGC through different binding sites independent of NO.

“The symptoms of the disease include shortness of breath, dizziness, fainting and leg swelling.”

Bayer conducted Phase I clinical trials on Adempas between March 2009 and January 2010. The randomised, double blind, crossover assignment enrolled 16 patients. Primary outcome measure of the study was to investigate the impact of multiple-dose Adempas. Secondary outcome measures included investigation of pharmacokinetics and assessment of safety and tolerability of Adempas.

The approval of Adempas was based on the results from Phase III CHEST-1 and PATENT-1 clinical trials.

The patients were randomised to receive a dose of adjustable Adempas or placebo. Primary endpoint of the study was the change from baseline to the end of week 16 in the distance walked in six minutes.

“The approval of Adempas was based on the results from Phase III CHEST-1 and PATENT-1 clinical trials.”

Study results showed that Adempas-administered patients improved in exercise capacity as measured by the six-minute walk test (6MWT). The walk distance in Adempas group increased by a mean of 39m from baseline, in contrast to a mean decrease of 6m in the placebo group at week 16.

The PATENT-1 was an international, multicentre, randomised, placebo-controlled clinical trial. It was conducted between December 2008 and May 2012. It enrolled 443 patients with pulmonary arterial hypertension. Patients were administered with dose-adjustable Adempas or placebo. The primary and secondary endpoints of the study were similar to those of CHEST-1 study.

Study results showed that patients treated with Adempas statistically improved exercise capacity by a mean of 30m compared to a decrease of a mean of 6m in the placebo group. Pulmonary vascular resistance and NT-proBNP levels also decreased in Adempas-administered patients.

The most common adverse reaction encountered during both the clinical studies on Adempas included headache, dyspepsia, dizziness, nausea, diarrhoea, hypotension, vomiting and anaemia.

Adempas is the first and only FDA-approved drug in the US for the treatment of CTEPH. Other medications approved for the same indication but going to lose patent protection in the coming years include Ventavis (iloprost) manufactured by Actelion, Revatio (sildenafil) produced by Pfizer, Remodulin (treprostinil) and Adcirca (tadalafil) developed by United Therapeutics.

Revatio is an approved formulation developed by Pfizer for the treatment of pulmonary arterial hypertension.

Edarbi for the Treatment of Hypertension, United States of America

Edarbi (Azilsartan medoxomil) was developed by Takeda Pharmaceuticals for the treatment of hypertension in adults.