The neuron is the most important cell in the CNS and the peripheral nervous system. MS is characterised by the loss of the protective myelin sheath (demyelination).
The main forms of multiple sclerosis (MS) are distinguished by their different patterns of development of disability over time. Relapsing-remitting MS is the most common form of the disease.
Major cells are involved in the disease process in multiple sclerosis. Key: APC: antigen-presenting cell; CD8+ T cells: Cytotoxic T cells; TH1, TH2: regulatory (helper) T cells; VLA4: Very Late Antigen 4 adhesion molecule.
Disease-modifying drugs currently used in the treatment of MS. 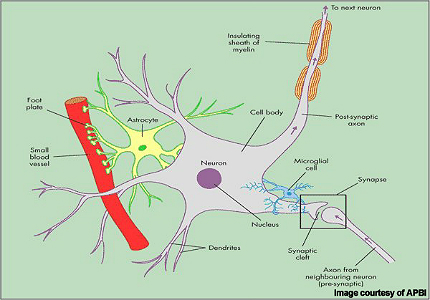 Alemtuzumab (marketed as Campath/MabCampath/Lemtrada) is an anti-CD52 monoclonal antibody (MAb) for which Bayer HealthCare holds exclusive global marketing rights. It was licensed in 2001 for the treatment of chronic lymphocytic leukaemia.

However, it is seen as having potential in other therapeutic areas, including multiple sclerosis (MS). In collaboration with Genzyme Corporation, Bayer explored its use in the treatment of MS, for which Phase III clinical trials started in 2007.

In June 2010, alemtuzumab was granted fast-track designation by the US Food and Drug Administration (FDA).

This status was intended to speed up the process developing life-threatening drugs. Under the fast track designation the drug became eligible for a priority review.

The FDA has accepted the supplemental Biologics License Application (sBLA) file seeking approval of the drug for the treatment of relapsing multiple sclerosis (RMS) patients in January 2013. The drug is expected to receive approval from the FDA by late 2013.

"In June 2010, alemtuzumab was granted fast-track designation by the US Food and Drug Administration (FDA)."

MS is an inflammatory autoimmune-mediated disease of the nervous system characterised by recurrent relapses followed by periods of remission. After trauma, it is the second most common neurological disability to affect young and middle-aged adults. It affects twice as many women as men, with the relapsing forms of MS the most common.

Patients with MS display a range of symptoms that arise from demyelination (loss of myelin sheath) in the central nervous system (CNS), which includes the brain, spinal cord and optic nerves.

While symptoms vary between patients, they commonly include blurred vision, slurred speech, numbness or tingling in the limbs and problems with balance and coordination, due to the loss of control over vital functions such as seeing, walking and talking.

Alemtuzumab is a highly specific MAb that binds to the CD52 cell surface antigen present on B and T cells as well as natural killer cells and monocytes where it induces antibody-dependent cytotoxicity and cell death (apoptosis).

By targeting cells implicated in autoimmune-mediated destruction of the nervous system, alemtuzumab suppresses the immune attack and may help address the root cause of MS.

A growing body of data suggest that treatment with alemtuzumab may be effective in patients with relapsing-remitting MS and potentially more effective than existing treatments.

In the CAMMS223 Phase II trial, involving 334 treatment-naïve MS patients, the proportion of clinically disease-free patients was significantly higher in alemtuzumab-treated patients than in the interferon beta-1a (Rebif) group over three years: 86 vs 63% at year one, 81 vs 48% at year two, and 71 vs 39% at year three; p values <0.0001. ‘Clinically disease-free’ was defined as the absence of both relapses and sustained accumulation of disability during the assessment period.

"Bayer explored its use in the treatment of MS, for which Phase III clinical trials started in 2007."

In September 2009, Genzyme announced that the four-year follow up data of its Phase II trials for MS showed a significant 72% reduction in relapse rate. The data showed sustained accumulation of disability by 73% three years after the patients received their last dose of alemtuzumab.

In April 2011, Genzyme reported five-year follow up data from the Phase II clinical trials for MS — and the results showed that alemtuzumab outperformed Rebif in many respects. The majority (65%) of MS patients who were administered alemtuzumab continued to be free of clinically-active disease, and the drug also improved the low-contrast vision. Just 27% of the patients administered Rebif were found to be free of clinically-active disease.

About 87% of the patients administered alemtuzumab were free of sustained accumulation of disability, compared to 62% for the Rebif-administered patient group.

With Bayer’s support, Genzyme initiated two Phase III trials. CARE-MS I (Comparison of alemtuzumab and Rebif Efficacy in Multiple Sclerosis), a randomised, rater-blinded study, compares alemtuzumab to interferon beta-1a (Rebif) in treatment naive patients with relapsing-remitting MS. Enrolment was completed in 2009, and results were announced in 2011.

The second Phase III trial, CARE-MS II, studied patients who have continued to relapse while on approved MS therapies. Enrolment was completed in September 2009, and results were out in November 2012.

The EU approval of the drug was based on data from the Phase III TEMSO (TEriflunomide Multiple Sclerosis Oral) and TOWER (Teriflunomide Oral in people With relapsing remitting multiplE scleRosis) studies.

The advent of the first generation of disease-modifying drugs, which include interferon beta-1a and 1b as well as glatiramer acetate, represented an important advance in the treatment of MS when introduced into clinical practice. Approved for the treatment of relapsing forms of MS, they reduce the frequency and severity of exacerbations as well as the number of lesions seen on MRI.
Bayer Schering Pharma (the pharmaceutical arm of Bayer HealthCare) is an established player in this market with Betaferon (interferon beta-Ib), the first disease-modifying drug to be introduced for MS. With alemtuzumab, the company has the potential to expand its treatment options for MS patients. At present, alemtuzumab is only an investigational agent for MS and its use is confined to the formal clinical trial setting where patient safety can be closely monitored.

Multiple sclerosis is a chronic and disabling disease, with healthcare costs disproportionate to the numbers affected.

In the US alone, costs are estimated to exceed $10bn a year. The introduction of interferon beta-1a revolutionised treatment for many patients with MS and fuelled the growth of the worldwide market for MS therapies.

Drug safety has been a concern with some newer MS treatments and is something on which regulatory authorities are increasingly focusing attention.

As a licensed medication, alemtuzumab has a well-documented side-effect profile, of which immune thrombocytopaenic purpura is a recognised serious side effect.