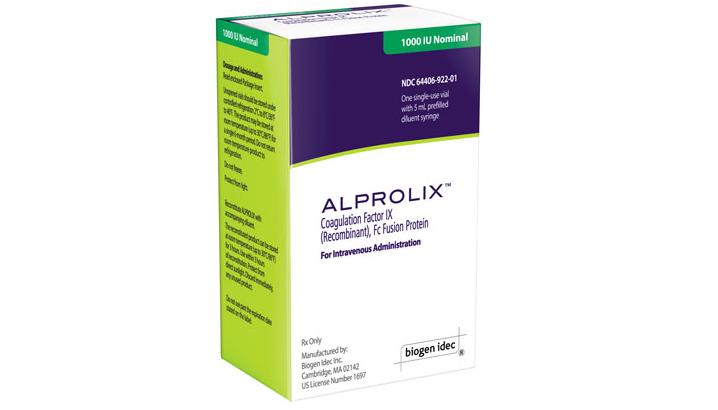 Alprolix [Coagulation Factor IX (Recombinant), Fc Fusion Protein] is an intravenous injection indicated for the control and prevention of bleeding episodes, as well as routine prophylaxis in haemophilia B-affected adults and children aged 12 and above. The drug was developed and marketed by Biogen idec in collaboration with Swedish Orphan Biovitrum (Sobi).

Health Canada approved Alprolix for the control and prevention of bleeding episodes and routine prophylaxis in haemophilia B patients in March 2014.

Biogen idec received the US Food and Drug Administration’s (FDA) approval for Alprolix in March 2014 for the control and prevention of bleeding episodes, perioperative (surgical) management and routine prophylaxis in adults and children with haemophilia B.

The European Medicines Agency (EMA) approved Alprolix for the treatment of Haemophilia B in May 2016.

Haemophilia B is a rare hereditary blood clotting disorder caused by factor IX deficiency. Factor IX is one of the proteins needed for blood clotting.

It can lead to repeated bleeding episodes and may cause pain, irreversible joint damage and life-threatening haemorrhages.

The disease is estimated to affect approximately 3,300 people in the US. According to a global survey conducted by the World Federation of Hemophilia in 2011, 25,000 people were estimated to be diagnosed with haemophilia B worldwide.

The drug is available in one single use vial with a 5ml prefilled diluents syringe for intravenous administration.

Approvals for Alprolix were obtained from a global phase III clinical study known as B-LONG. It was an open-label, multi-centre clinical study that enrolled 123 males aged 12 and above with haemophilia B. It was conducted in 50 haemophilia treatment centres located across 17 countries in six continents.

An intravenous drug indicated for the treatment of bleeding disorder in patients with factor XIII deficiency.

Results demonstrated that the adults and adolescents with severe haemophilia B who were given Alprolix once weekly or once every ten to 14 days had prevented or reduced the bleeding episodes with prophylactic infusions in a safe and effective manner.

The overall annualised bleeding rates (ABR) or projected rate of bleeding episodes in a year reported in weekly prophylaxis arm, individualised-interval prophylactic regimens arm and on-demand treatment arm included 2.95, 1.38 and 17.69 respectively. The average dosing interval in individualised-interval prophylaxis was 12.5 days, while it was 13.8 days in the last six months of the study.

Biogen idec initiated a phase III paediatrics study on Alprolix in February 2012. Also known as Kids B-LONG study, it was an open-label, non-randomised and parallel assignment enrolling 26 patients. Positive results were obtained from the study in February 2015.

Alprolix is the first approved long-acting haemophilia B therapy. Biogen Idec holds the rights to develop, manufacture and market Alprolix in North America.

Sobi holds the right to develop and commercialise Alprolix in Europe, Russia, the Middle East and Northern Africa.