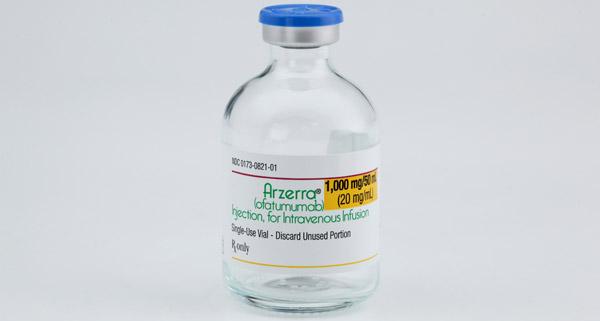 Arzerra (ofatumumab) is the first-line drug approved for the treatment of chronic lymphocytic leukaemia (CLL). The drug is developed and marketed by GlaxoSmithKline (GSK) in collaboration with Genmab.

In April 2014, supplemental biologic licence application (sBLA) of Arzerra was approved by the US Food and Drug Administration (FDA). Afrezza was approved in combination with chlorambucil as a first-line treatment for treatment of CLL patients who are not treated earlier and for whom fludarabine-based therapy was proved ineffective.

Arzerra also received marketing authorisation from the European Commission (EU) in July 2014. The EC approved Arzerra in combination with chlorambucil or bendamustin as a first line treatment for patients with CLL. The Committee for Medicinal Products for Human Use (CHMP) of the European Medicines Agency (EMA) issued a positive opinion for Arzerra in May 2014.

Chronic lymphocytic leukaemia (CLL) is a type of leukaemia characterised by uncontrollable production of B cell lymphocytes, whose main function is to fight infections. But in case of patients with CLL, B cell lymphocytes do not fight, instead they get accumulated in bone marrow, lymph nodes and spleen and overcrowd the healthy cells. People with CLL have an increased risk of infections, which complications may lead to morbidity and mortality.

Signs and symptoms of CLL include fatigue, weakness, anaemia, and enlarged liver, spleen or lymph nodes.

More than 105,000 people in the US are estimated to be living with CLL. According to American Cancer Society, an estimated 15,680 new CLL cases were recorded in the US in 2013. CLL is responsible for approximately 6,000 deaths every year in Europe.

Arzerra (ofatumumab) is a human monoclonal antibody designed to target the CD20 molecule usually found on the surface of normal B lymphocytes and CLL cells. Ofatumumab binds to the extracellular loops of CD20 molecule. The Fab domain in ofatumumab mediates immune effector functions to result in B-cell lysis in vitro.

"Results from the study showed that there was a significant improvement in median progression-free survival."

FDA approval for Arzerra was based on the results obtained from a Phase III clinical trial known as Complement 1.

The Complement 1 study was an open-label, randomised, parallel-arm study which enrolled 447 CLL patients with an average age of 69 years. All subjects were not treated earlier and fludarabine-based therapy was not suitable for them.

The most common adverse effects observed were neutropaenia, asthaenia, headache, lower respiratory tract infection and upper respiratory pain. Some infusion reactions were observed in 67% of subjects treated with the combination of Arzerra and chlorambucil.

Arzerra was developed under a collaboration and co-development agreement between GSK and Genmab. The drug is a registered trademark of GSK group. Arzerra is also indicated as a monotherapy for the treatment of CLL patients who are refractory to fludarabine and alemtuzumab.