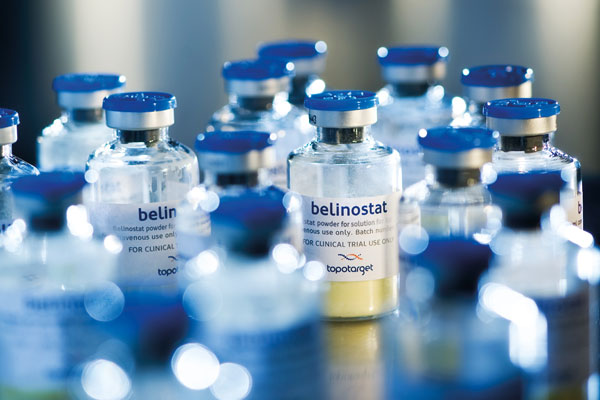 Beleodaq (belinostat) Belinostat (PXD 101) is a histone deacetylase (HDAC) inhibitor that is being investigatedindicated for the treatment of relapsed or refractory (R/R) peripheral T-cell lymphoma (PTCL). It was originally discovered by Topotarget and is being co-developed in association with Spectrum Pharmaceuticals based in the US.

Spectrum Pharmaceuticals submitted the new drug application (NDA) to the US Food and Drug Administration (FDA) for accelerated approval of belinostat for the treatment of relapsed or refractory (R/R) peripheral T-cell lymphoma (PTCL). The FDA acceptance for the NDA is expected to come within two months.

Topotarget received orphan drug designation for belinostat from the European Medicines Agency (EMA) for the treatment of malignant thymomas in July 2013. The drug has been granted patents in Europe until 2021. Patent in the US, to be valid up to October 2027, is expected to be received in September 2014.

Peripheral T-Cell Lymphoma (PTCL) is the most common blood cancer that occurs when lymphocytes grow abnormally in the lymph glands. The disease comprises a group of rare and aggressive non-Hodgkin lymphomas (NHLs) that develop from mature T-cells.

The disease is estimated to affect 10% to 15% of all patients with NHL. It affects people aged 60 years or older. It is commonly diagnosed more often in men than in women.

Belinostat contains a pan-Histone deacetylase (HDAC) inhibitor. The drug is still being investigated for effective use against multiple cancers. Pre-clinical experiments demonstrated that the drug works by inhibiting cell proliferation and inducing programmed cell death in tumour cells. The drug normalises the abnormal gene function pattern characteristic of cancer cells. It includes a combination of traditional chemotherapy.

The drug is available in a dose of 1,000mg/m2 for intravenous administration.

The FDA’s approval of belinostat was based on the results obtained from a phase II clinical trial known as CLN-19 BELIEF study. The study enrolled 129 R/R PTCL patients and was a multicentre, open label, and single group assignment. The primary outcome measure of the study was finding the objective response rate (ORR). The secondary outcome measures included safety and further efficacy parameters.

The study results demonstrated that the patients treated with belinostat showed an ORR of 26% in all PTCL patients, 28% in PTCL patients with platelet counts above 100,000/μL, and 45.5% in patients with the PTCL subtype angioimmunoblastic T-cell lymphoma (AITL). The median duration of response (DoR) reported in the study was 8.3 months and the longest DoR was 29.4 months.

"The median duration of response (DoR) reported in the study was 8.3 months and the longest DoR was 29.4 months."

Spectrum will conduct the first part of confirmatory clinical trials on belinostat, known as BelCHOP study. The study will administer belinostat plus cyclophosphamide, hydroxydaunorubicin, oncovin, and prednisone. It is designed to determine to find what dose of belinostat combined with CHOP can be safely administered together for the first-line treatment of patients with PTCL.

The BelCHOP Phase III clinical study is expected to enrol up to 28 patients by the end of 2014, and the second part of the confirmatory trial is expected to be initiated in the first half of 2015.

Topotarget entered into a license agreement with Spectrum Pharmaceuticals for the joint clinical development of belinostat, in February 2010. As part of the agreement Spectrum must pay $10m cash payment, and one million shares, worth about $9.4m, towards the first milestone payment to Topotarget. Spectrum must pay $25m towards the second milestone payment upon the FDA approval of belinostat.

The agreement was amended in October 2013 entitling Spectrum to carry out the commercial manufacture of belinostat for a five-year period with an option to renew further.