Chronic obstructive pulmonary disease (COPD) is a respiratory problem.
The main cause of COPD is tobacco smoking. Image courtesy of Sjschen.
Breo Ellipta can be administered using a dry powder inhaler (DPI). Image courtesy of Raul654. 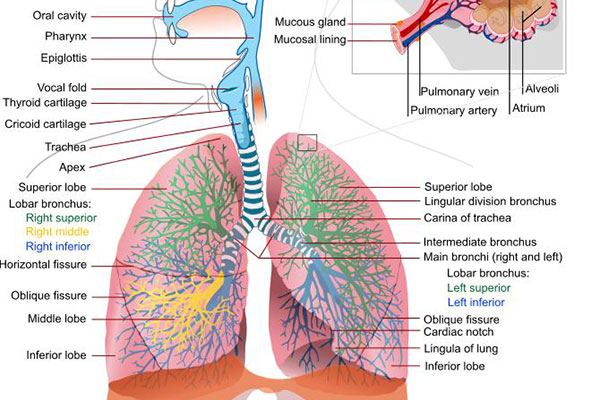 The drug was developed by GlaxoSmithKline (GSK) in collaboration with Theravance.

The drug received approval from the Japanese Ministry of Health, Labour and Welfare (MHLW) for the treatment of bronchial asthma in September 2013.

It has received a positive response from the European Medicines Agency’s (EMA) Committee for Medicinal Products for Human Use (CHMP) for the treatment of COPD patients in September 2013. The final approval from EMA is expected to be received by the end of 2013.

Breo Ellipta is marketed under the trade name Relvar Ellipta in Europe and Japan.

“The drug was developed by GlaxoSmithKline (GSK) in collaboration with Theravance.”

Chronic obstructive pulmonary disease (COPD) is a lung disease that restricts the flow of air to and from the lungs, causing shortness of breath.

Most of the patients affected by COPD have a blend of both forms of the disease. The main cause of the disease is tobacco smoking.

COPD is estimated to affect about 27 million people in the US, according to the National Heart, Lung and Blood Institute (NHLBI).

The drug helps breathing by reducing the risk of future exacerbations with a once-daily inhalation.

The drug is available in new dry powder inhaler (DPI) form, which contains 100µg of fluticasone furoate and 25µg of vilanterol.

“The drug helps breathing by reducing the risk of future exacerbations with a once-daily inhalation.”

GSK conducted a Phase I clinical trial on Breo Ellipta between December 2011 and March 2012. The randomised, open-label, crossover assignment enrolled 30 patients with COPD.

GSK conducted a Phase III clinical trial on Breo Ellipta between February 2011 and October 2011. It was also a randomised, double blind, and parallel assignment. The study enrolled 531 patients aged 40 years and above.

Commercialisation and marketing of Breo Ellipta in the US

Breo Ellipta was launched in the US market in 2013. The other medications approved for the treatment of the same indication include Tudorza Pressair developed by Forest Laboratories and Almirall, and Spiriva developed by Boehringer Ingelheim and Pfizer.

GSK entered into an agreement with Theravance for the development of and commercialisation of long-acting beta2 agonist (LABA) products in November 2002.

GSK licensed MABA program of Theravance for the treatment of COPD in 2005. Theravance entered into an agreement with Elan Corporation in May 2013 as per which, Elan will pay $1bn royalty payment to Theravance for offering 21% participation interest in potential future royalty payments associated with four respiratory programs that Theravance partners with GSK.

Anoro Ellipta for Treatment of Chronic Obstructive Pulmonary Disease, US

Anoro ellipta (umeclidinium bromide / vilanterol) is a dry powder for inhalation, indicated for the treatment of airflow obstructions in patients suffering from Chronic Obstructive Pulmonary Disease (COPD) or emphysema.