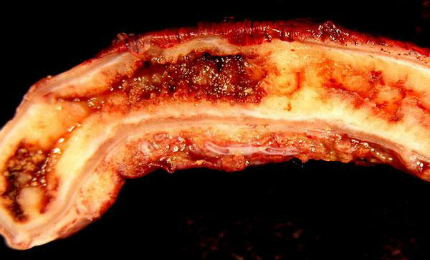 Ceftazidime-avibactam is an investigational antibiotic indicated for treatment of patients with complicated urinary tract infections (cUTI) and complicated intra-abdominal infections (cIAI). Actavis is jointly developing the drug in collaboration with AstraZeneca.

Actavis submitted the New Drug Application (NDA) for ceftazidime-avibactam to the US Food and Drug Administration (FDA) based on safety and efficacy data from Phase II clinical trials conducted on the drug.

An investigational antibiotic being developed for treating patients with certain Gram-negative infections.

The FDA accepted the NDA of ceftazidime-avibactam for treatment of adult hospitalised patients with cUTI and cIAI including those caused by multi-drug resistant Gram-negative bacteria in September 2014. The action date for the drug under the Prescription Drug User Fee Act (PDUFA) is expected during the first quarter of 2015.

The marketing authorisation application (MAA) for the ceftazidime-avibactam in Europe is expected to be submitted for the review of European Medicines Authority (EMA) in the first quarter of 2015.

The main cause of intro-abdominal and urinary tract infections are Gram-negative bacteria which are highly adaptive pathogens that can develop resistance through various mechanisms. These bacteria are resistant to almost all the drugs including carbapenems which are often considered as the last defense, and can also cause other bacteria to develop resistance to the drug.

Complicated intra-abdominal infections (cIAI) is the most problematic infection, with appendicitis alone affecting 300,000 patients every year.

Ceftazidime is an accepted and established medicine for serious Gram-negative bacterial infections."

Ceftazidime is a third-generation antipseudomonal cephalosporin, which is an accepted and established medicine for serious Gram-negative bacterial infections. Avibactam is a next-generation, non-β lactam β-lactamase inhibitor whose addition to ceftazidimen protects it from breakdown by β-lactamases.

The combination of these two drugs provides a unique treatment option, compared with existing treatment for serious Gram-negative infections as it can effectively fight a wide range of infections including carbapenem resistant enterobacteriaceae (CRE) and pseudomonas aeruginosa.

The drug will be available in the form of an injection which can be administered intravenously.

The NDA for ceftazidime-avibactam was accepted by the FDA for review, based on the results obtained from two Phase II clinical trials, which collectively enrolled 350 patients with cUTIs and cIAIs from nearly 50 locations across the world.

The first Phase II clinical trial was a multicentre, double-blind, randomised study conducted to compare the safety and efficacy of ceftazidime-avibactam plus metronidazole in treatment of cIAI with meropenem, an antibiotic injection to treat a range of infections.

The second Phase II clinical study was a randomised, investigator-blinded, multicenter study which compared the safety and efficacy of ceftazidime-avibactam and imipenem-cilastatin in hospitalised subjects with serious cUTIs.

The primary outcome of the study was favourable with a microbiological response observed five to nine days after the therapy. The results showed the safety and efficacy of ceftazidime-avibactam was similar to that of imipenem-cilastatin.

"The results showed the safety and efficacy of ceftazidime-avibactam was similar to that of imipenem-cilastatin."

Actavis also announced positive results of two Phase III clinical trials on the drug, which will be submitted to the FDA along with the sNDA.

The two Phase III clinical trials namely, Reclaim-1 and Reclaim-2, were randomised, multi-centre, double-blind, parallel group studies which evaluated the safety and efficacy of ceftazidime-avibactam compared to meropenem in patients with cIAIs. The studies enrolled over 1,066 patients from 30 countries. Data from both studies were analysed as single pool dataset with due permission from the FDA and the EMA.

Actavis announced positive results from the two Phase III clinical trials conducted on ceftazidime-avibactam in August 2014. The company plans to submit a supplemental New Drug Application (sNDA) to the FDA based on the results from these studies.

The results demonstrated that the patients treated with ceftazidime-avibactam met the objective of statistical non-inferiority compared to meropenem. The primary endpoint was a clinical cure rate 28 to 35 days after the test of cure visit. Ceftazidime-avibactam was also proved to effectively to treat cIAI patients.

Actavis, headquartered in Dublin, Ireland, is a pharmaceutical company which specialises in the development, production and commercialisation of branded and generic medicines, particularly for diseases associated with the central nervous system, gastroenterology, urology, cardiovascular, respiratory and anti-infective. The company’s commercial operations are spread over 60 countries with more than 30 manufacturing and distribution facilities located across different countries worldwide.

Forest Laboratories, a subsidiary of Actavis will market ceftazidime-avibactam in North America whilst AstraZeneca will commercialise the drug in the rest of the world.

Other drugs available in the market for treatment of bacterial infections include Doripenem developed by Johnson & Johnson, and Ceftolozane and tazobactam, an investigational drug developed by Cubist Pharmaceuticals.