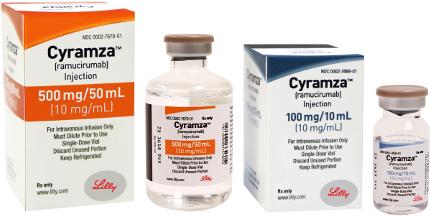 Cyramza (ramucirumab) is a human monoclonal antibody for the treatment of Gastric cancer. Cyramza molecule was originally discovered by ImClone Systems, which was later acquired by Eli Lilly and Company in 2008.

Cyramza is the first FDA-approved treatment for gastric cancer after prior chemotherapy. Eli Lilly received approval for Cyramza from the US Food and Drug Administration (FDA) as a single-agent treatment for patients with advanced or metastatic gastric cancer or adenocarcinoma of the gastroesophageal junction (GEJ) in April 2014. The US FDA also granted orphan designation to the drug.

In November 2014, the FDA approved Cyramza in combination with paclitaxel (a type of chemotherapy) as an indication for people with advanced or metastatic gastric or GEJ adenocarcinoma.

Cyramza in combination with docetaxel received approval from the FDA in December 2014, for the treatment of metastatic non-small-cell lung cancer (NSCLC) in patients who already received platinum-based chemotherapy.

Also known as stomach cancer or adenocarcinoma, gastric cancer originates in the form of a malignant tumour in the lining of the stomach. In its advanced stages, the disease travels through the bloodstream and reaches organs such as the liver, lungs and bones. It is the fifth most common cancer and the third-leading cause of cancer deaths worldwide.

Around a million new gastric cancer cases were registered worldwide in 2012. The disease is prevalent outside the US and in the European Union (EU). According to National Cancer Institute estimates, 22,220 new cases and 10,990 deaths related to gastric cancer occurred in the US alone in 2014.

FDA approval for Cyramza was based on the results obtained from a phase III clinical trial known as REGARD study. The randomised, double-blinded and placebo-controlled study enrolled 355 patients across 29 countries. Patients enrolled in the study had locally advanced or metastatic gastric cancer, including gastroesophageal junction adenocarcinoma, following progression after initial fluoropyrimidine or platinum-containing chemotherapy.

Patients were administered with Cyramza solution and best supportive care (BSC) compared with placebo plus BSC. The primary end-point of the study was overall survival and the secondary outcome measure was progression-free survival.

The results of the study demonstrated that patients given Cyramza 8mg/kg by infusion every two weeks and best supportive care (BSC), compared with placebo and BSC, showed improved overall survival and progression-free survival. The Cyramza 8mg/kg by infusion plus best supportive care (BSC) group also witnessed an increase in the median overall survival of patients with advanced gastric cancer by 37%.

The adverse reactions found in the Cyramza-administered patients during the clinical study included hypertension and diarrhoea.

Eli Lilly and Company, headquartered in Indianapolis, US, is engaged in the discovery, development and commercialisation of high-quality medicines. The company has 13 manufacturing plants and around 38,000 employees across 55 countries, marketing products in more than 125 countries.