Daklinza is the first 12-week, all-oral therapy indicated for the treatment of Hepatitis C (HCV) genotype 3 infections. Image: courtesy of Bristol-Myers Squibb.
Daklinza is available in the form of tablets meant for oral administration only. Image: courtesy of Bristol-Myers Squibb.
The active ingredient in daclatasvir exhibits dual modes of anti-viral activity. Image is in the public domain. 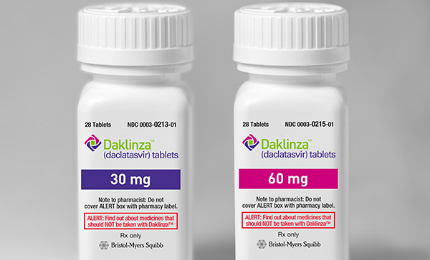 Daklinza (daclatasvir), an NS5A replication complex inhibitor, is the first 12-week, all-oral therapy indicated for use with sofosbuvir, for the treatment of hepatitis C (HCV) genotype 3 infections. The drug was discovered and developed by Bristol-Myers Squibb (BMS).

The US Food and Drug Administration (FDA) approved Daklinza (daclatasvir), under priority review as an all-oral, 12-week, once-daily regimen for the treatment of patients with hepatitis C genotype 3 infection, in July 2015.

The resubmitted new drug application (NDA) for Daklinza (daclatasvir) and sofosbuvir for the treatment of chronic HCV genotype 3 was accepted by the FDA in March 2015.

BMS submitted the NDA for daclatasvir in combination with asunaprevir, an NS3/4A protease inhibitor, in April 2014.

Asunaprevir was withdrawn in October, following which the FDA requested additional data for daclatasvir in combination with other antiviral agents for the treatment of HCV. The resubmitted NDA was accepted in March 2015.

The drug is also approved in Japan, Europe, and in a number of countries in central and south America, Middle East and Asia-Pacific.

Hepatitis C is a liver infection caused by hepatitis c, a blood-borne virus transmitted through direct contact with infected blood. It causes inflammation of the liver, which leads to diminished liver function or liver failure.

The infection is less likely to exhibit symptoms until the liver gets damaged, which may take several years.

In chronic HCV patients, the infection leads to scarring and poor liver function, leading to complications, including jaundice, fluid accumulation in the abdomen, bleeding and liver cancer.

Genotype 3 is the most treatment-resistant and aggressive hepatitis C that affects 12% of chronic HCV patients in the US.

According to the Centers for Disease Control and Prevention’s estimates, HCV affects 2.7 million Americans and approximately 170 million people worldwide.

Daklinza’s active ingredient, daclatasvir, exhibits dual modes of anti-viral activity. It binds to the N-terminus of NS5A and inhibits both viral RNA replication and virion assembly.

The drug is available in the form of tablets in various dosages of 60mg and 30mg for oral administration only.

Harvoni is the first approved medicine that does not require administration with interferon or ribavirin, which are also indicated to treat the same infection.

The FDA approval for Daklinza was based on results from a Phase III clinical trial conducted to determine the safety and efficacy of the drug in combination with sofosbuvir.

The study, named Ally-3, was an open-label clinical trial that enrolled 152 patients with chronic HCV genotype 3 infection and a compensated liver disease that were either new to treatment (treatment-naïve) or treatment experienced.

The patient group had an average age of 55 years, more than half were male, 90% were white, and the remaining were either Asian or black.

Subjects were treated with Daklinza 60mg and sofosbuvir 200mg, once a day, for 12 weeks and were under observation for 24 weeks after treatment.

Co-primary endpoints of the study were HCV RNA below the lower limit of quantification (LLOQ) at 12 weeks after completing therapy (SVR12) in each treatment group.

Furthermore, the rates were achieved with the 12-week therapy without the use of ribavirin.

The most common adverse reactions noticed during the trial were headache, fatigue, nausea and diarrhoea.

At the core of their research is daclatasvir, which is being investigated in multiple treatment regimens and in patients with co-morbidities.

Other unmet medical needs for which daclatasvir is being investigated include pre and post-transplant patients and HIV/HCV co-infected patients.

Other therapies currently available in the market to treat chronic hepatitis C infection include AbbVie’s Technivie for genotype 4 HCV, Viekirax and Exviera for genotype 1 HCV, and Gilead Sciences’ Sovaldi (sofosbuvir) for chronic HCV.