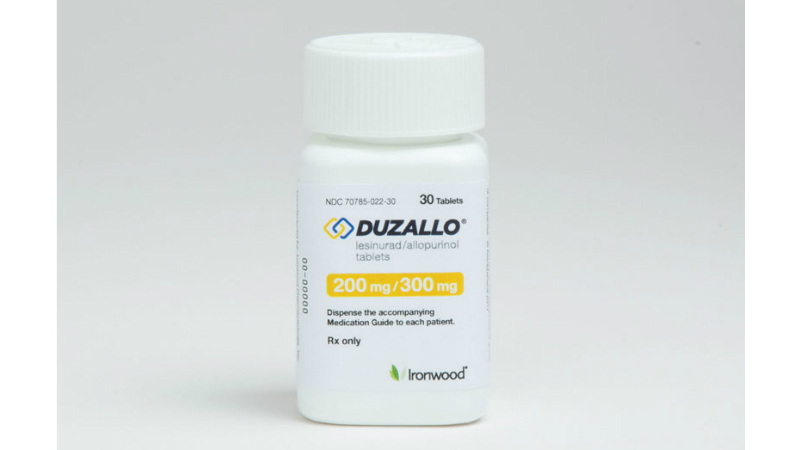 The new drug application (NDA) for Duzallo was submitted by Ardea Biosciences on behalf of developer Ironwood Pharmaceuticals. It was accepted for review by the US Food and Drug Administration (FDA) in January 2017.

The drug received FDA approval in August 2017 in gout patients who had not achieved target serum uric acid (sUA) levels with XOI alone.

Gout is an inflammatory arthritis in adults caused by hyperuricemia characterised by high levels of uric acid in the blood. The disease occurs due to the deposition of monosodium urate crystals in the joints or soft tissue.

The disease results in painful flares and serious impending long-term health problems. It is found to occur more commonly in men than women.

More than four million patients are estimated to be treated with XOI for gout in the US. Of these, more than two million are uncontrolled and are not achieving target sUA levels of < 6mg/dL set by American College of Rheumatology (ACR).

Duzallo is a fixed-dose combination of allopurinol and lesinurad. Allopurinol is a xanthine oxidase inhibitor (XOI) that targets sUA and reduces the production of uric acid (UA). Lesinurad is a urate transporter inhibitor that increases renal excretion of UA by selectively inhibiting the action of URAT1.

The dual-mechanism of the two ingredients helps to address inefficient excretion and overproduction of UA.

FDA approval of Duzallo was based on results from the clinical programme supporting the Zurampic® (lesinurad) NDA and a pharmacokinetic study. The study evaluated adult patients that failed to achieve target sUA levels on allopurinol alone. The subjects were administered with bioequivalence of the fixed-dose combination of lesinurad and allopurinol tablets.

The safety and efficacy of Duzallo was demonstrated in two pivotal Phase III clinical trials named CLEAR 1 and CLEAR 2.

The most common adverse reactions found in patients administered with Duzallo in clinical trials were headaches, influenza, higher levels of blood creatinine, and heartburn.

Lesinurad was discovered and developed by Ironwood Pharmaceuticals, and is commercialised in the US with brand name Zurampic®.

Ironwood Pharmaceuticals obtained rights to commercialise Duzallo in the US from AstraZeneca. Duzallo is planned to be launched in the US market in Q4, 2017, and is expected to generate more than $300m in sales a year.