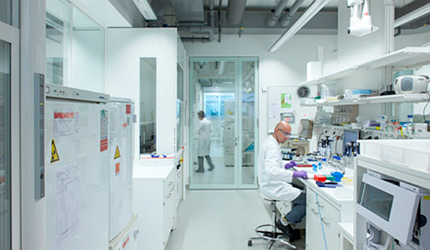 Exjade (deferasirox) is an oral iron chelator developed and manufactured by Novartis. It is indicated for the treatment of iron overload in patients with non-transfusion-dependent thalassemia (NTDT) syndromes.

In November 2012, Exjade obtained a positive opinion for approval in Europe from the Committee for Medicinal Products for Human Use (CHMP) for treating chronic iron overload in patients aged ten years and older.

Exjade was approved by the US FDA in November 2005. The drug also received approval from the European Commission (EC) for the treatment of chronic iron overload in patients aged six years and older.

"Chronic iron overload is a condition in which too much iron is built up in the body."

Chronic iron overload is a condition in which too much iron is built up in the body. The disease is caused by either a genetic disorder known as hereditary haemochromatosis (HHC), or by receiving numerous blood transfusions and taking high levels of supplemental iron.

The disease, however, can also have an impact on patients without regular transfusions taking place. People with NTDT syndrome are especially affected by iron overload.

It is estimated that about three quarters of a million people across the world have the NTDT syndrome. Patients with NTDT accrue iron overload by means of intestinal absorption.

Exjade contains deferasirox, a molecule that reduces the excess iron present in the body through chelation therapy. The drug binds to the atoms of iron and eliminates them through urine or feces excretion. The drug is available for oral administration in 125mg, 250mg and 500mg doses.

Novartis initiated a Phase II clinical study on Exjade in 2009. The randomised, double-blind, placebo-controlled study enrolled 156 patients in Europe. It evaluated the efficacy and safety of Exjade in NTDT patients who had iron overload. The primary objective of the study was assessing the efficacy and safety of the Exjade five and 10mg/kg/day doses in NTDT patients in comparison with a placebo.

"Statistical results showed that the LIC decreased by 30% in 49% of the patients administered with Exjade 10mg/kg/day doses."

The study continued for year and found there was a change in liver iron concentration (LIC) from the baseline.

The regulatory submissions for Exjade were based on a Phase III clinical study. It was the first pivotal placebo-controlled study that examined the benefit of iron chelation in NTDT patients with Exjade.

The results of the study, announced in December 2011, demonstrated that in the patients who were administered with Exjade 10mg/kg/day, the LIC was reduced by 3.8mg of iron per gram from baseline, while in the placebo group the LIC increased by 0.38mg. The study also showed that Exjade 10mg/kg/day doses were superior to a 5mg/kg/day.

The statistical results also showed that the LIC decreased by 30% in 49% of the patients administered with Exjade 10mg/kg/day doses, while in placebo patients the LIC was reduced by just two percent from the baseline.

Other treatments available on the market for the similar indication include Ferriprox, a generic drug manufactured by ApoPharma, and Desferal, also produced by Novartis.

Brilinta is an anti-platelet drug which decreases the platelet aggregation and prevents blood clots.

Zohydro (hydrocodone) is a single-entity oral drug indicated for the treatment of chronic pain.