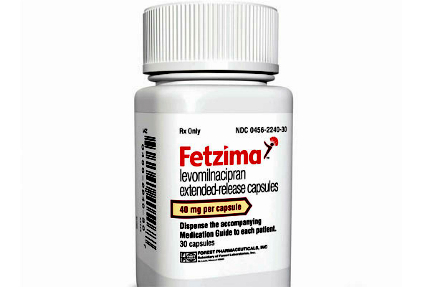 Fetzima (levomilnacipran) is an antidepressant indicated for the treatment of adult patients suffering from major depressive disorder (MDD). The drug was discovered by Pierre Fabre Laboratories and co-developed by Forest Laboratories.

Forest Laboratories and Pierre Fabre Laboratories submitted a new drug application (NDA) for the approval of Fetzima to the US Food and Drug Administration (FDA) in September 2012.

The US FDA gave approval for Fetzima for the treatment of MDD in adult patients in July 2013.

"The US FDA gave approval for Fetzima for the treatment of MDD in adult patients in July 2013."

Major Depressive Disorder (MDD) is characterised by feelings of sadness and a loss of interest in normal activities and relationships. The disease affects the patient’s ability to work, sleep, study, eat and enjoy daily activities.

MDD is estimated to affect about 16 million adults in the US every year. The medical expenses involved for the treatment of the disease are estimated to be about $44bn every year in the US.

MDD could become the second leading cause of disability in the world by the year 2020, according to the World Health Organisation’s (WHO) estimates.

The FDA approval for Fetzima was based on three Phase III clinical trials, including two fixed-dose and one flexible-dose studies. The studies enrolled about 1,600 MDD patients who were administered with once-daily dose of Fetzima 40mg, 80mg, 120mg or placebo. The primary endpoint was change of total score according to Montgomery Åsberg Depression Rating Scale (MADRS) from baseline to endpoint. The secondary endpoint included change in total score from baseline to endpoint as per Sheehan Disability Scale (SDS).

"The drug’s precise mechanism of action is not known, but it is presumed to work by inhibiting the reuptake of serotonin and norepinephrine transporters."

The results of the studies demonstrated that patients administered with Fetzima showed statistically significant improvement when compared to placebo. The patients who were administered with Fetzima experienced significant improvements in both the primary and secondary endpoints, which were measured through mixed-effects model for repeated measures (MMRM) and last-observation-carried-forward (LOCF) analyses.

The mean baseline MADRS total score was 36 for all Fetzima treatment groups in first Phase III clinical trial. The LS mean difference of change from baseline was statistically significant in all Fetzima groups when compared to placebo.

The mean baseline MADRS total score was 31 for all Fetzima treatment groups in the second Phase III clinical trial. The LS mean difference from baseline was statistically significant in 40mg/day and 80mg/day doses of Fetzima.

The mean baseline MADRS total score was 35 for all Fetzima treatment groups in the third Phase III clinical study. The LS mean difference from baseline was statistically significant at 40-120mg/day dose of Fetzima.

Fetzima showed superiority over placebo in all the three phases of the study. Fetzima met the primary endpoint of the studies, which included improvement of change in depressive symptoms from baseline at week eight as per MADRS total score measurement.

Other medications approved for the treatment of same indication include Seroquel developed by Astra Zeneca, Viibryd and Lexapro, both manufactured by Forest Laboratories, and Paxil developed by GSK.

Paxil – SSRI for the Treatment of Major Depressive Disorders, US

Paxil (paroxetine hydrochloride) was first developed in 1975 by a Danish company called Ferrosan.

Seroquel (quetiapine fumarate) is an anti-psychotic drug indicated as an add-on treatment for patients suffering from major depressive disorder (MDD). The drug was developed by AstraZeneca.