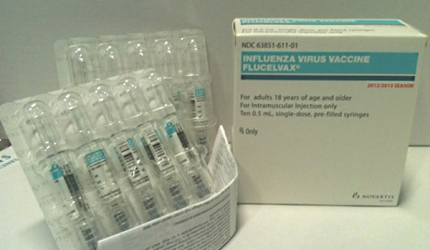 Flucelvax, developed by Novartis in association with the US Department of Health and Human Services, is a vaccine that provides protection against seasonal influenza for adult patients aged 18 years and above.

The vaccine was approved by the US Food and Drug Administration (FDA) for protection against influenza in November 2012.

"The vaccine was approved by the US Food and Drug Administration (FDA) for protection against influenza in November 2012."

Influenza, also known as flu, is a highly contagious respiratory disease. It is caused by the influenza virus belonging to the Orthomyxoviridae family, which commonly affects mammals and birds. The disease is transmitted through the air by coughs or sneezes.

The common symptoms of the disease include a sore throat, headaches, chills, coughing, weakness, fatigue, general discomfort and muscle pains. Sometimes it can also lead to pneumonia, which can be deadly for the young and the elderly.

Flucelvax is produced by culturing of cells obtained from the kidney of a dog. The vaccine is specifically used for active immunisation in adults who are aged above 18 years for the prevention of influenza subtypes A and B.

The vaccine is administered in the form of intramuscular injection. It is given in a single 0.5ml dose in the muscular region of the upper arm.

Novartis conducted several Phase III clinical trials on Flucelvax vaccine to obtain FDA approval. A Phase III clinical study on Flucelvax was conducted in the US, Finland and Poland. It was a randomised, observer-blinded, placebo-controlled trial which enrolled 11,404 adults aged between 18 and 49 years. The study took place during the 2007-2008 influenza season. The patients were administered with Flucelvax, Agriflu or placebo.

The results of the study showed that the influenza attack rate in Flucelvax-administered patients group was 0.19% where as in placebo group it was 1.14%.

"Flucelvax is produced by culturing of cells obtained from the kidney of a dog."

Novartis conducted three Phase III clinical studies for finding immunogenicity of Flucelvax vaccine in adult patients aged between 18 and 64 years. The studies enrolled over 1,353 subjects. The immune responses in the study were measured through hemagglutination inhibition (HI) antibody titers. The patients were administered with Flucelvax and Agriflu.

The results of the study demonstrated that Flucelvax-administered patients showed similar immunogenicity when compared to Agriflu.
Novartis conducted another Phase III clinical study focusing on non-inferiority of Flucelvax vaccine compared to Agriflu in adult patients aged between 18 and 64 years.

The company also carried out a Phase III clinical study across Europe and the US. The randomised, controlled clinical study enrolled about 7,700 people aged between 18 and 49 years. The patients were administered with either Flucelvax or a placebo.

The study’s results demonstrated that Flucelvax was 83.8% effective in preventing flu when compared to placebo. About 6,700 were evaluated for the safety of Flucelvax. The results also showed that general reactions as well as injection site reactions found in Flucelvax-administered patients were similar to those of the current flu vaccines. Common adverse reactions found in the study included headache, soreness at the injection site and fatigue.

Production and launch of influenza vaccine

FluLaval is an influenza vaccine that was approved by the US FDA on 23 July 2010, for use on people who are 18 years and older to help protect them against influenza disease.

Flucelvax was developed by Novartis in collaboration with the US Department of Health and Human Services, Biomedical Advanced Research and Development Authority (HHS, BARDA). The vaccine will be manufactured at Holly Springs facility in North Carolina, which is currently being constructed.

The total cost involved in the development of cell-culture technology at the new plant is about $1bn. The US government contributed $500m for the construction of the plant. Novartis will launch Flucelvax in the US once the Holly Springs facility starts commercial production.

Other vaccines already approved and available in the market for influenza include FluLaval developed by GlaxoSmithKline (GSK), Trivalent VLP vaccine developed by Novavax, Rapiacta manufactured by BioCryst Pharmaceuticals, Shionogi (in Japan and Taiwan), and Green Cross (in South Korea).