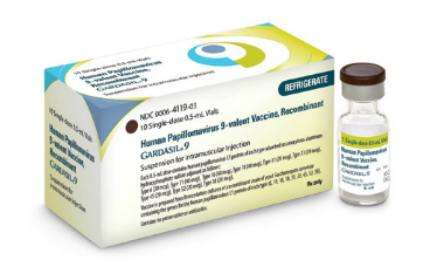 The vaccine was discovered and developed by Merck.

Gardasil 9 was approved by US Food and Drug Administration (FDA) as a preventative vaccine for various types of cancers in December 2014.

HPV infection causes warts on different parts of the body and may also lead to cancers of the cervix, vulva, vagina, penis, oropharynx and anus. The seven HPV types 16, 18, 31, 33, 45, 52 and 58 cause most of these cancers.

Approximately 575,000 cases of HPV-related cancers are estimated to occur annually worldwide. It is also estimated that 33 new cervical cancer cases are diagnosed each day totalling to 12,000 cases every year in the US.

US Centers for Disease Control and Prevention (CDC) made HPV vaccination a public health priority. According to the CDC, an additional 53,000 cervical cancer cases could be prevented by increasing three-dose HPV vaccination coverage to 80%.

The exact mechanism of action of Gardasil could not be established yet as HPV infects only human beings. However, animal studies showed the vaccine could be developing humoral immune responses.

Gardasil 9 is available in the form of a 0.5ml vial for intramuscular use only. The schedule of the vaccine is at the beginning, two months and six months. The drug should be administered intramuscularly in the deltoid region of the upper arm, or in the higher anterolateral area of the thigh.

"Gardasil 9 was approved by US Food and Drug Administration (FDA) as a preventative vaccine for various types of cancers in December 2014."

All four clinical studies were placebo-controlled, double-blind, randomised trials, which enrolled a total of 20,541 women between the age of 16 and 26.

Results of the study demonstrated no new cases of HPV-16 or 18 related cervical intraepithelial neoplasia (CIN) 2/3 or adenocarcinoma in situ (AIS) were reported in patients treated with the full treatment regimen of Gardasil 9, while 53 cases were reported in the placebo group.

Efficacy of Gardasil 9 was assessed in an active comparator-controlled, double-blind, randomised clinical trial (Study 1) conducted on girls and women between the age of 16 and 26.

The study enrolled 14,204 women who were vaccinated without pre-screening for the presence of HPV infection. It compared clinical efficacy of Gardasil 9 and Gardasil for five additional HPV types.

In clinical trials, Gardasil 9 demonstrated 96.7% efficacy against the combined incidence of cervical, vaginal and vulvar cancers caused by HPV types 31, 33, 45, 52 and 58.

The safety of Gardasil 9 was studied in six clinical trials, which enrolled more than 13,000 individuals. The most common adverse reactions found in patients administered with Gardasil 9 during the clinical studies included pain, swelling, erythema at the injection-site and headaches.

Merck plans to launch Gardasil 9 in the US market in early February 2015. It expects to receive the CDC’s Advisory Committee on Immunization Practices (ACIP) recommendation, relating to the use of product and coverage under the Vaccines for Children (VFC) programme at the February 2015 meeting.