Haegarda® is available in 2,000IU and 3,000IU freeze-dried powder for subcutaneous use. Image courtesy of CSL Behring.
The drug contains plasma-derived concentrate of C1-esterase inhibitor (C1INH). Image courtesy of Jfdwolff.
HAE is a fatal genetic disorder characterised by painful, debilitating, and unpredictable episodes of swelling. Image courtesy of LucyHAE. 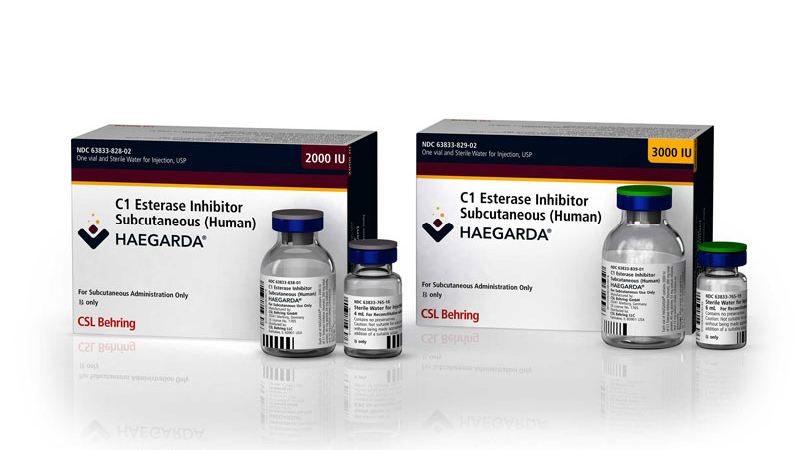 CSL Behring’s new biologics license application (BLA) for Haegarda® was accepted for review by the US Food and Drug Administration (FDA) in August 2016. The drug was approved in June 2017.

HAE is a fatal genetic disorder characterised by painful, debilitating, and unpredictable episodes of swelling of the abdomen, larynx, face, and extremities, among other areas of the body. The cause of the disease is deficient and dysfunctional C1 Esterase Inhibitor (C1-INH) protein in the blood. Symptoms of the disease become prominent in childhood and worsen during teenage years.

HAE attacks can result in episodes of extreme pain, diarrhoea, nausea, and vomiting caused by swelling of the intestinal wall.

The drug is available in 2,000IU and 3,000IU freeze-dried powder doses, which can be administered through subcutaneous injection.

“[Haegarda] replaces the deficient and dysfunctional natural C1-INH and restores functional C1-INH levels to more than 40% of normal levels.”

It was a pivotal, double-blind, randomised, placebo-controlled, cross-over study that evaluated HAE patients during two 16-week treatment periods. Patients were administered with 40IU/kg and 60IU/kg doses of Haegarda twice weekly subcutaneously versus placebo.

The primary endpoint of the study was reduction of the time-normalised number of HAE attacks. The secondary endpoints included the responder rate and the number of rescue medication uses.

Results of the study demonstrated that patients treated with 40IU/kg and 60IU/kg doses of Haegarda® reduced the median number of HAE attacks by 89% and 95% respectively, in comparison with placebo. The study also showed that approximately 40% of patients treated with a higher dose did not experience any attacks, while some had milder HAE symptoms overall.

Common side effects associated with the patients treated with Haegarda® were injection site reactions, hypersensitivity reactions, swelling of the nasal passages and throat, and dizziness.

CSL Behring is a subsidiary of CSL Plasma. It is a biotherapeutics company that develops innovative therapies for the treatment of coagulation disorders, primary immune deficiencies, and hereditary angioedema. The company also develops treatments for inherited respiratory diseases and neurological disorders.

The company’s products are also used for heart surgery, organ transplants, burn treatment, and for the prevention of haemolytic disease in newborns.

CSL Behring plans to launch Haegarda® in the US market shortly. Other medications available for the treatment of hereditary angioedema (HAE) include Ruconest, developed by Pharming Group and Salix Phamaceuticals, and Kalbitor, manufactured by Dyax Corp.