Expand
Halaven contains an antineoplastic agent that is called eribulin.
The drug is derived from marine sponge natural product Halichondrin B.
The drug suppresses the growth phase of microtubules.
The FDA approval of Halaven was based on the results of the phase III clinical trials named EMBRACE. 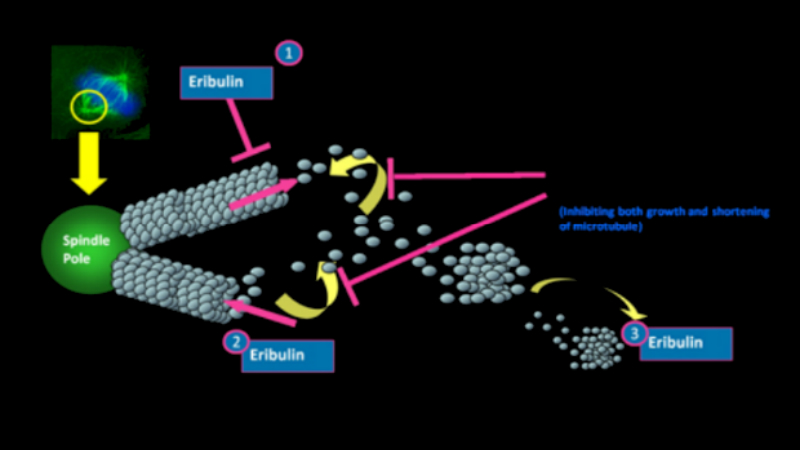 In March 2010, Eisai submitted a new drug application for Halaven to the US Food and Drug Administration (FDA). The drug was granted product priority review status by the FDA and was approved on 15 November 2010.

Eisai submitted marketing authorisation application for Halaven to the European Medicines Agency (EMA) in March 2010. The European Commission (EC) approved the drug for the treatment of advanced or metastatic breast cancer in March 2011.

The drug obtained marketing approval in Japan for the treatment of inoperable and recurrent breast cancer, in April 2011.

Halaven was also approved in Singapore in February 2011 and by Swissmedic in May 2011.

Metastatic breast cancer is the advanced stage of breast cancer during which the cancerous cells are spread to other areas of the body from the original tumour site.

The most common region the disease affects is the bone, followed by lungs and liver. The disease is often fatal, with existing treatments mainly limited to reducing the severity of disease.

Halaven contains an antineoplastic agent called eribulin. The drug is derived from marine sponge natural product Halichondrin B. The drug suppresses the growth phase of microtubules, the active matter components of cytoskeleton proteins present in all cells. Microtubules are important for the development and maintenance of cell shape. The drug disrupts mitotic spindles and exerts an anticancer effect by killing the cancerous cells.

The drug is suitable for the treatment of metastatic breast cancer in patients who have already received at least two doses of chemotherapeutic regimens, including vinorelbine, gemcitabine, capecitabine, taxane, anthracycline, other chemotherapy and hormonal therapy.

Eisai conducted phase I clinical trials on Halaven from August 2003 to July 2005. The study was conducted on 55 patients in the US to determine the maximum tolerated dose.

"Metastatic breast cancer is the leading cause of cancer mortality among women."

Phase II clinical trials on Halaven were conducted between September 2004 and November 2006. It was an open label study that enrolled 61 female patients.

The primary outcome measure was to find the response rate.

The secondary outcome measures included finding the safety and tolerability of Halaven, duration of response and time to progression of the disease.

The FDA approval of Halaven was based on the results of the global pivotal phase III clinical trials named EMBRACE (Eisai metastatic breast cancer study assessing physicians’ choice vs eribulin). It was an open-label, randomised and multi-centre study conducted on 762 patients who were previously administered with at least two doses of chemotherapeutic regimens.

It was a two-arm study. In the first arm the subjects were randomised to receive Halaven at a dose of 1.4mg/m² on days one and eight for 21 days. In the second arm conducted on a control group, 97% of patients received chemotherapy and 3% hormone therapy.

The most common side effects in the Halaven group were neutropenia, nausea, anaemia and hair loss.

The objective response rate in the Halaven group was 11% and the median response duration was 4.2 months.

Halaven was tested in another Phase III clinical trial known as study 301. The trial was an open label, two-parallel arm and multicentre study. It enrolled 1,102 women with metastatic breast cancer. The study evaluated Halaven in comparison to capecitabine (Xeloda).

In July 2012, preliminary results of the study were announced. The results showed that Halaven did not meet the co-primary endpoints of the study, which included overall survival (OS) and progression-free survival (PFS). An improved OS was observed, but was not statistically significant.

The study demonstrated that the patients treated with Halaven showed statistically significant increase in overall survival (OS) when compared with TPC.

Halaven’s approval in Japan was based on results obtained from a Phase III EMBRACE (Eisai Metastatic Breast Cancer Study Assessing Physician’s Choice Versus E7389) study and a phase II study.

Having received approval for the drug from the US FDA, Eisai launched Halaven in the Russian market in September 2013 and in India in October 2013.