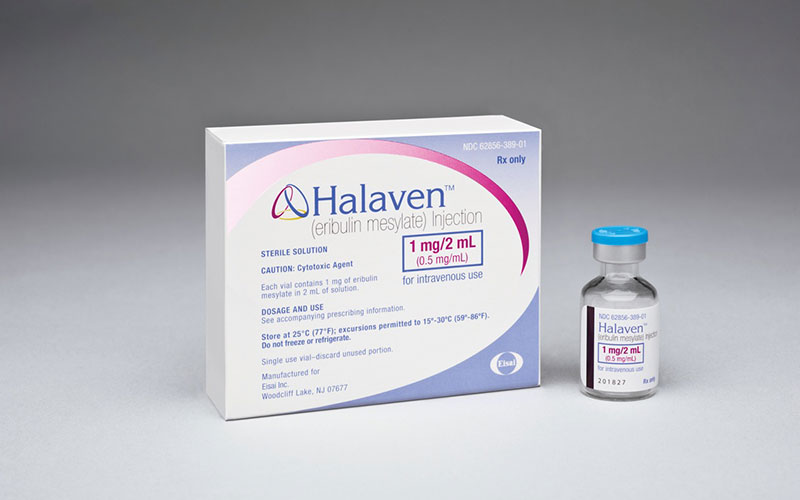 Halaven (eribulin mesylate) is an injectable chemotherapy drug developed by Eisai for the treatment of unresectable or metastatic liposarcoma patients that previously received anthracycline-based chemotherapy.

Eisai submitted the new drug application (NDA) for Halaven for the treatment of liposarcoma to the US Food and Drug Administration (FDA), Europe Commission (EU) and Japan in July 2015.

It further submitted a supplemental new drug application (sNDA) for the drug, which was accepted by the FDA in September 2015 and a priority review status was granted.

The FDA approved Halaven on 28 January 2016, making it the first FDA-approved drug for liposarcoma. Halaven was granted orphan drug designation in the US and Japan.

Halaven is approved and marketed in Japan for the treatment of metastatic breast cancer.

Patients suffering from liposarcoma will develop painless deep-seated mass in the soft tissue and experience pain and functional impairment as the size of the tumour increases.

Approximately 2,000 cases of Liposarcoma are diagnosed a year in the US. The disease mostly occurs in middle-aged and older adults.

Halaven is a halichondrin-class microtubule dynamics inhibitor that has a distinct binding profile. It is a synthetic analogue of halichondrin b, isolated from the marine sponge Halichondria Okadai.

Halaven causes mitotic blockage through its prolonged tubulin-based anti-mitotic mechanism resulting in apoptotic cell death. It also causes changes in the cell structure and gene expression, decreasing migration and invasiveness of the cells.

The FDA approved Halaven based on results obtained from a multi-centre, open-label, randomised Phase III study named Study 309, which evaluated the safety and efficacy of Halaven versus dacarbazine.

Patients were treated on either Halaven-1.4mg/m² on day one and day eight or dacarbazine 850-1,200mg/m² for every 21 days until the progression of disease.

Serious adverse reactions included a decrease in white blood cell count, neuropathy, harm to a developing foetus and changes in heart beat (QTc prolongation), which may also lead to death.

ORLADEYO (berotralstat) for the Treatment of Hereditary Angioedema (HAE), USA
Topics in this article: