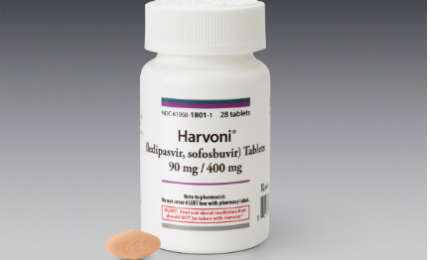 Developed by Gilead Sciences, Harvoni (ledipasvir/sofosbuvir) is the first combination pill approved for the treatment of adult patients with chronic hepatitis C genotype 1 infection. Harvoni is the first approved medicine that does not require administration with interferon or ribavirin, which are also indicated to treat the same infection.

Gilead Sciences submitted a new drug application (NDA) for Harvoni to US Food and Drug Administration (FDA) in February 2014. The FDA granted Harvoni a priority review and breakthrough therapy designation. The drug was approved for the treatment of chronic hepatitis C genotype 1 infection by the FDA in October 2014.

The marketing authorisation application (MAA) for Harvoni was submitted to the European Medicines Agency (EMA) in March 2014. Harvoni received a positive response from the Committee for Medicinal Products for Human Use (CHMP) of the EMA, following an accelerated review procedure in September 2014.

The company also submitted an NDA for Harvoni to Pharmaceutical and Medical Devices Agency (PMDA) in Japan in September 2014. It is currently under review.

Olysio (simeprevir) for the Treatment of Chronic Hepatitis C (CHC), US

Olysio (simeprevir) is an antiviral drug indicated for the treatment of chronic hepatitis C (CHC) infection.

Hepatitis C is a disease caused by the hepatitis C virus (HCV) and results in an inflamed liver. HCV is a blood-borne virus, which can cause both acute and chronic infection. The disease transmits through unsafe injection practices using unsterilised medical equipment and the transfusion of unscreened blood.

The complications of the disease include developing liver cirrhosis or liver cancer, and people infected with HCV in most cases show no symptoms until liver damage becomes apparent.

Harvoni is a combination of two antiviral drugs, ledipasvir and sofosbuvir. It contains 90mg of ledipasvir and 400mg sofosbuvir, which act as a HCV NS5A inhibitor and nucleotide analogue inhibitor of HCV NS5B polymerase respectively. Harvoni is available in the form of a film-coated tablet in orange colour and diamond shape for oral administration.

"According to the World Health Organisation’s (WHO) statistics, up to 150 million people in the world are infected with HCV."

The FDA approval for Harvoni was based on the results from three Phase III clinical trials known as ION-1, ION-2 and ION-3, which were conducted to evaluate the drug’s efficacy with or without ribavirin. The studies enrolled 1,518 participants with chronic HCV genotype 1 infection and compensated liver disease, who previously had not received any prior treatment or not responded to the previous treatment.

The participants in the three clinical studies randomly received Harvoni with or without ribavirin. The treatment was conducted for a period of eight, 12 or 24 weeks based on factors including prior treatment history, history of cirrhosis and baseline viral load. The primary endpoint for each study was sustained virologic response (SVR) after completing therapy at week 12 (SVR12).

Use of ribavirin showed no increase in response rates. The ribavirin-free treatment arms achieved between 94%-99% SVR12 rates.

Headquartered at Foster City in California, Gilead Sciences is a leading biopharmaceutical company engaged in the discovery, development and commercialisation of innovative therapeutics in areas of unmet medical need.

Other medications available for the treatment of chronic hepatitis C include Incivek developed by Vertex Pharmaceuticals, Mitsubishi Tanabe Pharma Corporation and Tibotec BVBA. Chronic hepatitis C can also be treated using Olysio developed by Janssen Therapeutics and Medivir, Sovaldi from Gilead Sciences, and Victrelis (boceprevir) manufactured by Schering-Plough and Merck.