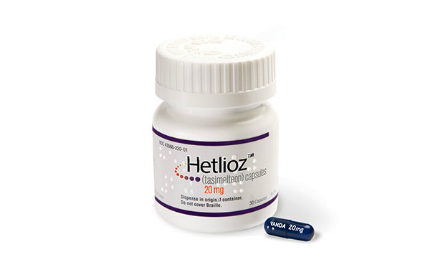 Hetlioz (tasimelteon) is the first and only drug approved in the European Union (EU) for non-24-hour sleep-wake disorder (Non-24). The drug is developed and marketed by Vanda Pharmaceuticals.

Hetlioz received a positive opinion from European Medicines Agency’s (EMA) Committee for Medicinal Products for Human Use (CHMP), which recommended the drug’s approval for the treatment of Non-24 in blind adults in April 2015.

If approved by the European Commission (EC), the drug will be granted marketing authorisation in 28 EU countries and in European Economic Area members including Iceland, Liechtenstein and Norway. The drug gained orphan designation from the EC in 2011.

Hetlioz was also approved by US Food and Drug Administration (FDA) in January 2014. It was accepted for priority review and received orphan product designation by the FDA.

“The active substance of Hetlioz is tasimelteon, which acts as a melatonin receptor agonist.”

Non-24 is a chronic, circadian rhythm disorder caused by misalignment of the endogenous master body clock to the 24-hour day cycle, leading to the disruption of sleep-wake cycle.

The disorder affects the majority of totally blind individuals due to the fact they cannot see light and cannot synchronise their body clock to the regular light-dark circle.

It is estimated that approximately 80,000 people are suffering from Non-24 in the US. People with the disorder often find it difficult to fall asleep or stay asleep and experience distress.

They may have reversed sleeping patterns needing to awake at night and sleep during the day. The disorder prevents them from following a normal daily schedule.

The active substance of Hetlioz is tasimelteon, which acts as a melatonin receptor agonist. Melatonin plays a key role in co-ordinating the sleep cycle. It is produced by the pineal gland in the brain during the hours of darkness.

Hetlioz, being a melatonin-receptor agonist, attaches itself to receptors that melatonin normally gets attached to and promotes sleep and regulates sleep patterns. The drug is available as 20mg hard capsules for oral administration only.

Paxil – SSRI for the Treatment of Major Depressive Disorders, US

Paxil is indicated for the treatment of a range of conditions which are known as major depressive disorders (MDD).

The EU’s orphan drug designation and the FDA’s approval of Hetlioz were based on results from clinical trials conducted to determine the safety and efficacy of the drug in patients with Non-24.

Results indicated that treatment with Hetlioz was more effective compared to that of a placebo, both in terms of increasing night time sleep and decreasing daytime sleep.

Study one enrolled 84 patients who were randomised to receive either Hetlioz 20mg or a placebo, one hour before bed time, every night for six months.

Study two was a withdrawal trial randomised in 20 patients with a median age of 55 years. It was designed to evaluate the drug’s maintenance of efficacy after 12 weeks.

During the 12 weeks, patients were treated with Hetlioz 20mg one hour prior to bedtime every night at same time.

Those patients in whom the calculated time of peak melatonin level occurred at the same time every day during the run-in phase were randomised for placebo treatment or continued with Hetlioz 20mg for eight weeks.

Sleeping patterns and duration of the night and day sleep during the studies were recorded using patient-recorded diaries.

Primary endpoints of the studies showed that in study one, patients treated with Hetlioz had an average of 195 minutes of night time sleep and 137 minutes of daytime nap time, which shows a significant improvement compared with a placebo.