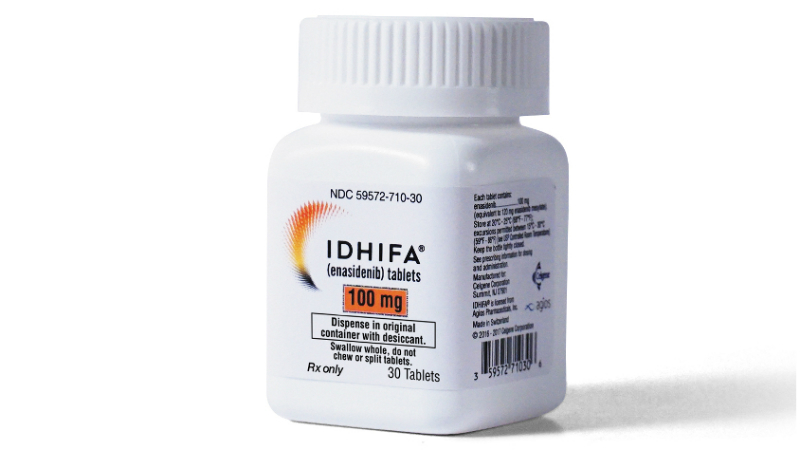 The drug was discovered by Agios Pharmaceuticals and licensed to Celgene Corporation for development.

A new drug application (NDA) was submitted to the US Food and Drug Administration (FDA) in December 2016. It was accepted for review in March 2017 and approved for the treatment of relapsed or refractory (R / R) AML in August 2017.

AML is a type of blood cancer that emanates in the bone marrow. The disease progresses rapidly to other parts of the body.

Patients with AML experience relapses in the majority of cases.

The IDH2 mutations are commonly found in between 8% and 19% of AML cases.

Symptoms of the disease include fever, easy bleeding, shortness of breath, weight loss, loss of appetite, and weakness.

More than 21,000 new cases of AML a year are estimated to be registered in the US.

Idhifa contains a small molecule inhibitor of the isocitrate dehydrogenase 2 (IDH2). The drug works against the mutant IDH2 variants to decrease 2-hydroxyglutarate levels and increases percentages of mature myeloid cells.

The drug is available in 100mg dose tablets for oral administration.

Celgene Corporation and Agios Pharmaceuticals conducted a Phase I clinical study on Idhifa that enrolled 239 patients with advanced haematologic malignances and an IDH2 mutation. A total of 176 had R / R AML. The patients were treated with Idhifa daily doses ranging between 50mg and 650mg in the dose-escalation arm.

The FDA approval for Idhifa was based on the results obtained from an open label single-arm, multi-centre, two-cohort clinical trial. This study enrolled 199 adult patients with R/R AML and an IDH2 mutation confirmed by the Abbott RealTime™ IDH2 test. Idhifa was administered orally at a starting dose of 100mg daily until disease progression or unacceptable toxicity.

The study also showed that 32 out of 42 patients who were independent of RBC and platelet transfusions at baseline became transfusion independent during 56-day post-baseline period.

The safety of Idhifa was evaluated in patients with R / R AML and an IDH2 mutation. The most common adverse reactions found in patients administered with Idhifa during the clinical study were nausea, vomiting, diarrhoea, elevated bilirubin, and decreased appetite.

Agios Pharmaceuticals granted worldwide development and commercialisation rights of Idhifa to Celgene Corporation in 2010. As per the agreement, Agios will receive $95m towards royalties on net sales. Agios co-commercialises Idhifa in the US.

Other drugs available for the treatment of AML include Volasertib developed by Boehringer Ingelheim Pharmaceuticals, Rydapt manufactured by Novartis, and Iomab-B produced by Actinium Pharmaceuticals.