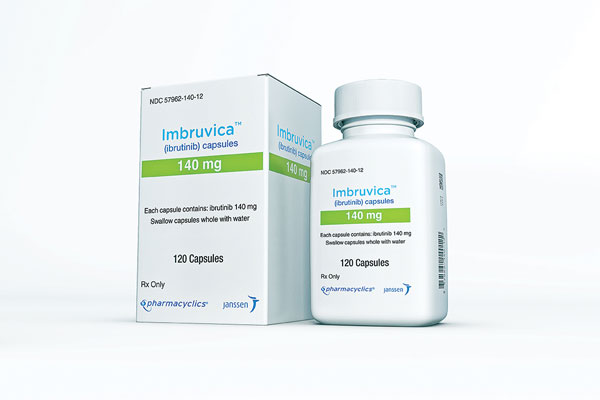 Imbruvica (ibrutinib) is an oral Bruton’s tyrosine kinase (BTK) inhibitor indicated for the treatment of mantle cell lymphoma (MCL) patients that previously received at least one therapy. The drug was jointly developed by Janssen Biotech and Pharmacyclics.

Janssen and Pharmacyclics submitted a new drug application (NDA) for Imbruvica to US Food and Drug Administration (FDA) in July 2013. The NDA for Imbruvica was accepted by the FDA in August 2013.

Imbruvica received marketing approval from European Union (EU) in October 2014. The drug is approved to be marketed in 28 member states of the EU for the treatment of adult patients suffering from relapsed or refractory MCL, or adult patients with chronic lymphocytic leukemia (CLL) who received at least one therapy before, and patients unsuitable for chemotherapy.

"Mantle cell lymphoma is a rare type of blood cancer of the B cells. It is a rare form of non-Hodgkin Lymphoma (NHL)."

Mantle cell lymphoma is a rare type of blood cancer of the B cells. It is a rare form of non-Hodgkin Lymphoma (NHL).

The slow growing cancer emanates in white blood cells (lymphocytes) and spreads to other tissues in the bone marrow, liver, spleen and gastrointestinal tract. An estimated 2,900 new cases of MCL are diagnosed every year in the US.

Imbruvica contains a small-molecule inhibitor of Bruton’s tyrosine kinase (BTK). Though the precise mechanism of action of the drug is not known completely, it is presumed the drug works by stopping the malignant B-cell proliferation and survival. It is also believed to prevent cell migration and substrate adhesion.

"The drug is available in the form of 140mg capsules for oral administration, and sold in 90 and 120 capsule boxes."

The drug is available in the form of 140mg capsules for oral administration, and sold in 90 and 120 capsule boxes.

The tumour response was evaluated according to the revised International Working Group (IWG) for non-Hodgkin Lymphoma criteria. Patients were administered with a recommended dose of Imbruvica 560mg (four 140mg capsules) orally once daily.

The primary outcome measure of the study was to measure the number of participants with a response to the drug. Secondary outcome measures included measuring the number of participants with adverse events as a measure of safety and tolerability, to measure the pharmacokinetics, and patient reported outcomes.

Results of the Phase II clinical study were announced in June 2013 and demonstrated that patients treated with Imbruvica showed an overall response rate of 65.8%, while 49% of patients achieved a partial response. The median duration of response was 17.5 months. The clinical study also evaluated safety and tolerability of Imbruvica in the treatment of MCL patients.

Imbruvica was developed under the FDA’s accelerated approval programme. The drug is co-marketed in the US by Pharmacyclics and Janssen Biotech.

Janssen affiliates hold marketing authorisation and market the drug in Europe, Middle East and African regions, and the rest of the world outside the US.

Other medications approved for the MCL include Revlimid (lenalidomide) manufactured by Celgene Corporation and Velcade (bortezomib) marketed by Millennium Pharmaceuticals.