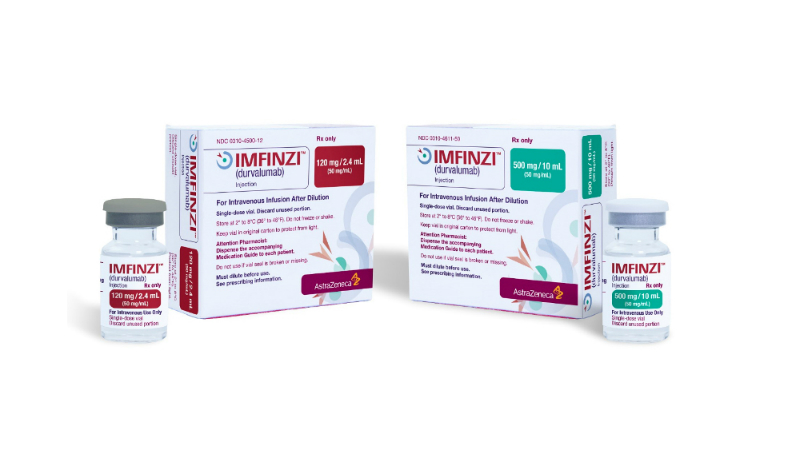 Imfinzi™ (durvalumab) is a monoclonal antibody (mAb) indicated for the treatment of metastatic urothelial carcinoma (mUC).

It was discovered and developed by MedImmune, a research and development (R&D) division of AstraZeneca.

The first biologics license application (BLA) for Imfinzi’s approval was accepted for review by the US Food and Drug Administration (FDA) in December 2016. The drug was also granted breakthrough therapy designation in February 2016.

AstraZeneca received accelerated approval for Imfinzi™ from the FDA in May 2017 based on tumour response rate and durability of response. The approval will be reviewed upon verification and description of the drug’s clinical benefit in confirmatory trials.

Urothelial carcinoma (UC) is the most common type of bladder cancer that arises from the epithelium lining of the urinary bladder. The disease impairs lymphocyte function and helps the cancer escape immune detection by exploiting inhibitory checkpoint pathways including programmed cell death ligand-1 (PD-L1)/PD-1.

The disease is often asymptomatic until it reaches the advanced or metastatic stages. It has a five-year survival rate in the US.

The symptoms of the disease include blood in the urine, pain or burning during urination without a urinary tract infection, a strong urge to urinate without producing much urine, or having a weak urine stream.

It is estimated that approximately 79,000 people in the US will be diagnosed with bladder cancer and 17,000 will die of the disease in 2017. Urothelial carcinoma accounts for more than 90% of bladder cancer cases in the US.

Imfinzi™ contains a human monoclonal antibody (mAb), which blocks the interaction of PD-L1 with PD-1 and CD80. It releases the inhibition of immune responses, without inducing antibody-dependent, cell-mediated cytotoxicity.

The drug is available in 120mg and 500mg doses for intravenous administration. The recommended dose is 10mg/kg body weight infused intravenously over 60 minutes every two weeks.

Accelerated FDA approval for Imfinzi™ was based on results obtained from a phase I/II clinical trial known as 1108 study. This multi-centre, open-label, dose-escalation and dose-expansion study investigated the safety and efficacy of Imfinzi in patients with locally-advanced or metastatic urothelial carcinoma of the bladder and progressed with platinum-containing chemotherapy, including those who progressed within 12 months of receiving the therapy in a neoadjuvant or adjuvant setting.

AstraZeneca initiated a phase III clinical trial on Imfinzi, known the DANUBE trial. The study is being conducted to investigate Imfinzi as a first-line treatment in urothelial carcinoma as a monotherapy and in combination with tremelimumab.

AstraZeneca has been conducting more than 30 clinical trials on Imfinzi™ in combination with other immuno-oncology (IO) agents and targeted therapies.